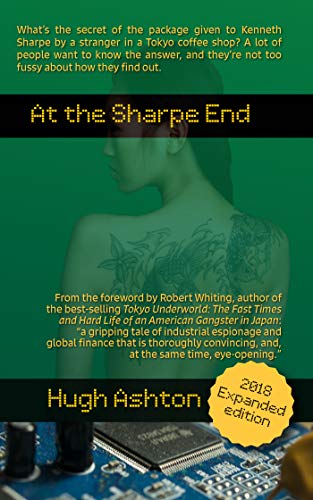 Book: At the Sharpe End by Hugh Ashton

about this book: This was my second novel, written just after I had been doing some of the same work as the protagonist - a consultant on the fringes of the technology and financial world in Tokyo.

The first draft of the book involved a major earthquake resulting in an accident at a nuclear power plant at Tokyo - this was some years before the massive quake on March 11, 2011, and I claim no powers of prophecy for this. It's just a stupid idea to put a nuclear reactor on a seismic fault line. However, the quake didn't happen before the book was first published, but the Lehman crash did - so that became the tipping point for the plot.

I'd worked in a few large financial houses in the IT departments, so I was able to place the story relatively accurately. In addition, I was friends with some people in Lehman Brothers in Tokyo, so some of the conversations in the book during the Lehman crash in 2008 are based on my talks with them (though they happened at the Press Club in Yūrakuchō rather than on the telephone).

The final showdown occurs on the causeway leading to Enoshima – a place very close to where I used to live (Kamakura), and I could never walk along that stretch of road without thinking of Kenneth Sharpe.

And though the accounts of a foreigner's life in Japan are pretty true to reality, my contacts with yakuza have thankfully been few and far between, as have my contacts with the law-enforcement and security services of the countries that chase Kenneth Sharpe around the place, and try to get the contents of the Hello Kitty box off him.