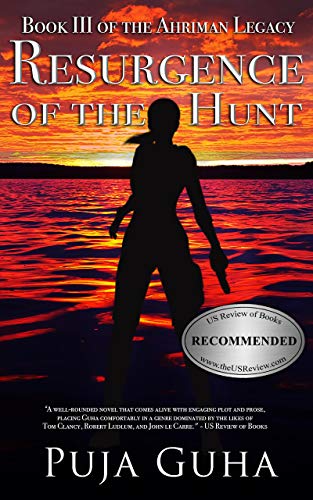 Book: Resurgence of the Hunt - A Global Spy Thriller (The Ahriman Legacy Book 3) by Puja Guha

about this book: Resurgence of the Hunt follows two lead characters, Petra Shirazi, an ex-spy of Iranian-American descent, and the Ahriman, a former assassin. The two characters have been pitted against each other and later forced to work together, out of which they developed a turbulent romance.

The story is full of twists and turns, and targeted at readers who enjoy thrillers, romantic suspense, and action and adventure stories such as The Dogs of War, Homeland, and the Bourne trilogy. It features a nuanced character study, especially in the interaction and relationship of the two lead characters, including a strong female protagonist.

In this book, Petra and the Ahriman are joined by several other espionage team members to work to bring down an illicit arms dealer who's used his resources and arms sales to prop up conflicts around the world and is responsible for the death of Vik, one of Petra's old flames. To hide her own culpability in his death though, Petra keeps her relationship with Vik a secret from the entire team, although this secret comes back to bite her.

The story takes them from Japan to London, and then heads to the island of Madagascar in the southeastern part of Africa.

A huge part of my inspiration for this story came from a long trip to Madagascar when I went there for work two years ago. The hotels and places that are mentioned in the book spoke to me, as did the stunning coastline and greenery.