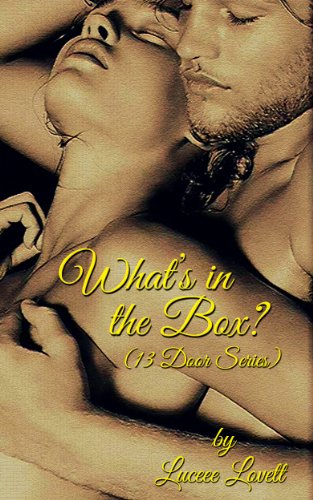 Book: What's in the Box (13 Doors Series) by Lucee Lovett

about this book: Adam steels himself as he prepared to enter door number two. He knew what awaited him was going to stretch him to his limit. However no amount of preparation could have prepared him for the task that was set before him. He had no clue as to what to do or where to start. This meant only one thing. He had to witness a demonstration of their usage. Something he did not relish as it would involve Chloe. He hated that secretly he was turned on by the fact he would be witnessing Chloe being sexually compromised with another man. In fact every time he though back to how she looked and the way her body responded so eagerly to another man's touch in the previous room – he felt a tingling sensation in his manhood; regardless of the fact she had thought the other man was him. He had been mesmerised by her beauty in that moment. Nevertheless, now he was given this new task to complete, which left him torn between the desire to protect his wife, or continuing the journey to protect his marriage.