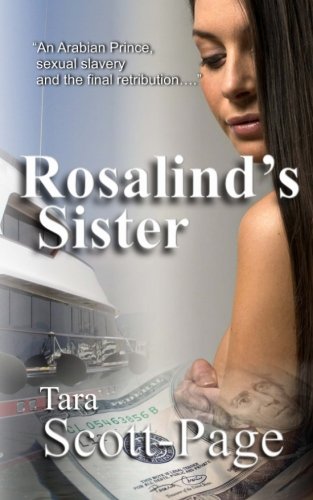 about this book: Rosalind's Sister is about a determined woman, desperate to escape her abusive father and a downtrodden existence in the lifeless North American town of Black Oak, Indiana in the economically depressed 1970's. She finds a new life, a new name and new found wealth in the big city of New York along with her dream man, a staggeringly rich Saudi Arabian Prince. He takes her to the desert Sheikdom of Dubai where his love turns to lust and her high flying lifestyle in to degrading sexual slavery. In attempting to escape with a new found friend from the corrupt and degenerate society of Dubai, she is captured and violently assaulted. A body is discovered on the beach some days later. However, her friend is bent on finding out what has happened to Rosalind to the point of direct confrontation with the sadistic Arab Prince. The meeting can only have one outcome. But can there be more than one survivor, and what if one of them turns out to be Rosalind's Sister?

This book is inspired by an urge to write about strong powerful woman of the type that survived and prospered against all odds, in a highly male dominated society, where women are treated as mere chattels and sexual objects. Such a society exists today in many areas of the Middle East and this novel attempts to expose such activities as human trafficking and sexual slavery which are still very much alive today. The work took three months to complete and the title arrived in the author's head one day as most good titles do. The cover image reflects the astounding beauty of the main character, Rosalind, and the trappings of wealth associated with venture in to the heady world of multi millionaires with no moral compass and even less compassion.

The hardest part of writing Rosalind was staying true to the events and scenario of the time with the author digging deep to ensure locations were accurately described and real with only some place names changed to protect certain identities.

When I saw this book listed as Erotica, I was expecting something written to a certain format with distasteful sex scenes and a poor command of the English language. How wrong could I be? The opening is great and pushed me on to wanting to know much more. The character of Rosalind comes over as a gutsy, great looking woman, ploughing her way through a world ruled by men, turning her sexuality against them to make her way in the world. I wasn't around in the 70's, but it's bad enough for a woman to be treated with respect now, so god knows what it was like 40 years ago. I read the complete book in two sessions and enjoyed every word. I wonder what this writer will come up with next as this first offering will be hard to beat. I have told all my friends about it and have no hesitation in awarding Rosalind's Sister five stars. [by Jane (eBookWriter)]