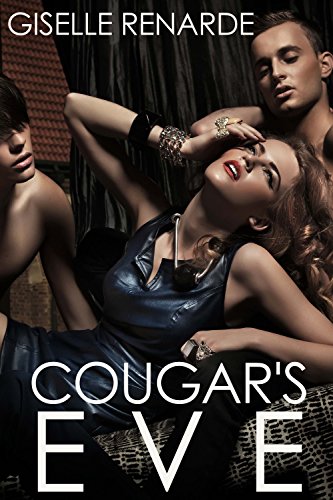 about this book: I'll tell you when I came up with the idea for my latest book, Cougar's Eve: I was sitting at home watching TV on New Year's Eve 2013 when I suddenly thought, "Gee... I guess I got old. When did that happen?" No partying, no want of it, no need for excitement or music or alcohol. A warm blanket is good enough for me.

There and then, I started writing Cougar's Eve. It's a novella about a middle-aged woman who wants nothing more than her couch and a big bowl of popcorn. Fortunately for her (or unfortunately?), she has a friend who's not too shy to drag her off that couch and drive her to (you guessed it): Cougar's Eve!

I was so excited about this book I wished I could write it overnight and publish it New Year's Day. The industry doesn't move quite that fast, and my fingers don't type that fast either (don't I wish I could write a book overnight--I'd be a millionaire!) but one year later (give or take a few weeks), Cougar's Eve has hit store. It's published by a great indie house called Excessica, available as an ebook and in print, and I'll share the marketing blurb with you now:

Trish has big plans for New Year's Eve: a giant bowl of popcorn, a nice warm blanket on the couch, and binge-watching TV all night long. With any luck, she'll be fast asleep when the clock strikes twelve.

Not if her vivacious friend from the gym gets a say! Lori has salacious plans, and she's persuaded Trish to join the party—even if it takes a touch of trickery to get Trish out of the house.

Trish isn't exactly overjoyed when Lori drags her to the Cougar's Eve New Year's party at a swanky resort hotel. Trish is definitely NOT a cougar. In fact, she hasn't been to bed with anyone since her husband split, and that was years ago.

When the hotel's gorgeous young receptionist teaches Trish a few tricks, she can't help wondering if Lori's had the right idea all along. One night living the cougar life couldn't ruin her forever… could it?