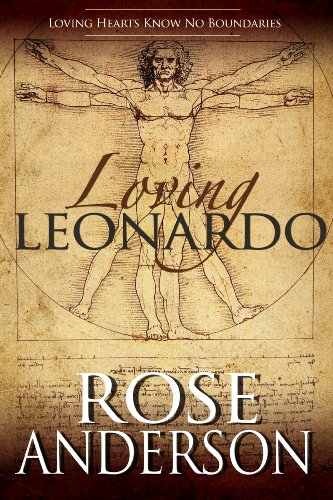 about this book: Loving Leonardo is is a polyamorous Victorian love story with a touch of reader-interactive art history.

The creation of this tale came right out of the American headlines the summer before the presidential election. The news was filled with women's issues and negative talk of "progressives". There was something about a news cast one day that grabbed my attention. Whom you love, and who you wanted to commit your love to, were hot issues as if love itself was a social condition and not a deeply personal thing. I'd also heard the term women's issues combined with progressive, but the word progressive was said with a sneer. It was presented as though the concept of women making their own decisions was unthinkable, and that was the point to the Suffragettes more than 100 years ago.

I'm a linear writer, that is, I don't plot out my stories, I let them evolve. Before I knew it, Ellie proposed marriage to Nicolas, an art historian who was also a confirmed bachelor who just happened to be a gay man. It was a surprise that he said yes and they went off to Venice on a wild adventure to find a book Leonardo da Vinci created for his long-time lover Salai. And wouldn't you know, they met Luca aboard ship, himself a historian with a keen interest in Leonardo da Vinci. Compatibility, friendship, and affection soon grew between them. Their time together becoming sensually charged, and the next I knew, they'd given me a polyamorous love story.

Loving Leonardo is a CataRomance Sensual Reads Reviewer's Choice Winner, and a Two Lips Reviews Recommended Read. This love story told in two parts. All of my books have symbolism and metaphor between the lines. I promise if you keep them to read again, each read through will uncover more. :)

• "I love that this author takes what could be just another turn of the century historical romance and completely revamps it into a very sexy, smart, and scintillating read."