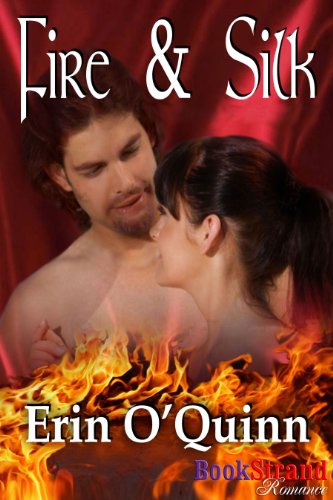 about this book: [log line] Two people crash and clash, desire and despise...when his fire meets her silk.

In 433 AD, in the northern Ireland kingdom known as Tyrconnell before the Norse invaders caused its name to change to Donegal...

Flann O'Conall is the green-eyed, redheaded son of King Conall Gulban, a real historical figure who was the first king to be baptized by St. Patrick. Flann makes his way back home to his father's great house only a few months each year, when the perilous winter begins to descend on the mountains where he likes to stay by himself. For he is a dedicated bachelor--not one to run from women, but not one to invite their company either.

One night, quite by accident, Flann meets a young virgin--actually a spitfire with a mind of her own--named Mariana. He's encamped a day's ride from his father's house, and he has taken shelter from the hard rain under a waterproof cover. When the silk-clad Mariana demands succor under his blanket, he reluctantly lets her in.

And then all fire breaks loose.

Erin O'Quinn's deep love for all things Irish shines in this book. From her use of Gaelige and her understanding of the customs and temperament of the Irish people to her landscape-painting descriptions of the countryside, you know that the rhythm of a bodhrán is her own heart's beat.

The story is set in ancient Ireland, not long after Patrick himself began the conversion of the land's inhabitants. Erin makes use of intensive research to ensure the historical accuracy of such things as clay-and-wattle buildings and techniques for hunting and fishing. There is plenty of detail in the little things, like making a signal fire, and yet not so much that the details bog the story down. And what a story it is!

When her headstrong impetuousness separates Marianna from her father and his party, she finds herself in desperate need of help to survive in the wilds of what is now County Donegal. That help comes in the unlikely - and unwilling - form of one Flann O'Conall, a loner returning home after an annual visit with his various kinsmen. She strikes him as petulant and arrogant; he strikes her as crude and standoffish. And yet when a cold hard rain drives her under his blanket, she finds him not quite so standoffish. Marianna is almost completely innocent, her only previous encounter with a man's body having been rough and traumatic. Flann takes her lack of understanding as proof of her view of him as inferior, while she takes his need as proof of the crude nature of any physical interaction between a man and woman.

The story unfolds as Flann and Marianna solve the mysteries of their own feelings, the differences in response between a man and a woman, and how to fit their bodies together in the eternal dance of love. The conflict between them is completely believable, as are the different kinds of surrender each must be willing to undertake if they are to find happiness.

The secondary characters are charming and well-wrought by this mistress of characterization. I found myself with a knowing smile many times watching Flann's kinsmen play their parts in the story. Erin captures the fierce independent spirit and interconnectedness with Place of the Irish people even in the secondary characters. The bond between the people of Ireland and their land is strong, lasting for generations in emigrants. Place is part of the Irish soul, and Erin understands this perfectly.

This book explores what happens when two people who love freedom from obligations to others, who are deeply connected with life outdoors, and who are intensely passionate and quick to misunderstand others are thrown together. They must come to terms with their confusion over their own emotions and learn to communicate in ways that go beyond the well-described intense pleasure of their passions.

Erin is an excellent writer, and this offering is well worth reading! [by Susan Wilson]