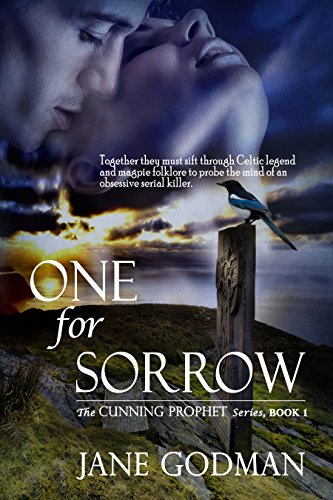 Book: One For Sorrow (The Cunning Prophet Series Book 1) by Jane Godman

Jane: Let me get straight on with the introductions. This is Dora Balniel—

Dora: Why not tell them my full name? After all, you chose it.

Dora (rolls her eyes): See what I have to put up with?

Jane: You know there's a good reason for the name. It comes out later in the series. Now, a bit of background to the first book, One for Sorrow. Dora here is from Dublin. She's a freelance biomedical scientist, but she is also a psychic investigator who works with the police—

Dora: Rewind a bit. Dora here doesn't want to be psychic. Dora here would rather poke her own eyes out with sticks if she had a choice.

Jane: Dora is a reluctant psychic investigator. Does that sound better?

Jane: When five girls have been raped and murdered within the space of eighteen months on the Isle of Man—

Dora (snorts): Yeah, right. The Isle of Man. Not the Maldives or Bermuda. That would have been too exotic. You had to send me to the Isle of Man.

Jane: We've been through this. You know why I chose the Isle of Man. Firstly, it has sentimental reasons for me. My grandfather was from a village called Ballasalla on the island. Secondly, it is set right in the middle of the other British Isles so it is a mix of them all in miniature. Thirdly, it is steeped in ancient history which was important to the story. Finally, I needed a setting that had very little experience of serial killers. Plus, you know very well, Dora, that you grew quite fond of the island in the end. Until—

Dora: Whoa. We said we wouldn't talk about that.

Dora (smiles reminiscently): Okay, that part was fun. But you tortured me as well! You let that killer get inside my head. He was controlling my mind, showing me what he was doing to those girls, taunting me. Anyway, why is this called Character Confessions? What am I supposed to have done that I need to confess to?
Jane: Oh, Dora, where shall we start? Don't you want to come clean about what happened in the shower? Or are you going to try and quickstep around the interesting matter of what went on in that dark corner of the dance floor?

Dora: Seriously? You brought me here to talk about my sex life? I thought you'd found out it was me who wrote those messages on your car.

A scuffle breaks out…

After that introduction, I hope you'll be tempted to read One for Sorrow, the first book in The Cunning Prophet Series!