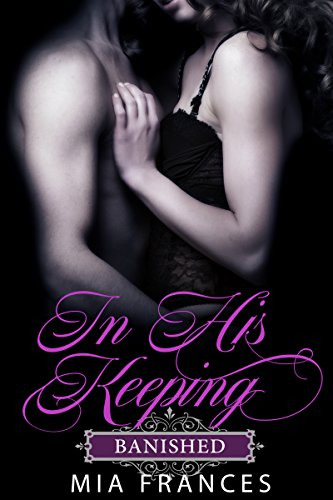 Book: IN HIS KEEPING - BANISHED by Mia Frances

about this book: Exiled to a luxurious penthouse fortress on Park Ave. and trailed by security teams wherever she goes, Sylvie Jenkins feels like a prisoner. She made the mistake of falling in love with her boss, reclusive bestselling author & billionaire entrepreneur, Connor Hudson. He's a strict, demanding Dom, who imposes rules and metes out punishment. He wants her submission, but she's not inclined to give it. They'd been living together in his rustic mansion in the Adirondack Mountains until the day police arrived and informed Connor he was the prime suspect in a series of grisly murders. People who loved him had a habit of turning up dead!

Without a word of explanation, Connor sends Sylvie away. She feels abandoned and betrayed.

He refuses to take her calls or answer her texts or emails unless it concerns the book they're working on. Connor tries to stay away from Sylvie, but he can't. Rebellious and reckless when it comes to her own safety, he's determined to rein her in. If she behaves like a willful child, he'll treat her like one. Their meetings are clandestine and sporadic, filled with painful discipline followed by the most exquisite pleasure.

Sylvie becomes jealous when Connor starts squiring other women to society events. He says it's to throw the "real" killer off the track. But Sylvie has her doubts.

Realizing she knows almost nothing about Connor's background, she searches the apartment for clues to his past. She discovers a locked door hidden away in a closet. Behind it is a room filled with photos of his former lovers bound, blindfolded, and gagged, their skin bruised and welted. Sylvie had always known Connor had a dark, almost sinister side, but she hadn't thought him dangerous or cruel. Now she wondered. She kept telling herself Connor wasn't a murderer. But the question remained, if he wasn't…who was?

Out of work and on the verge of being homeless, Sylvie Jenkins is desperate. It leads her to take a job with reclusive bestselling author & billionaire entrepreneur Connor Hudson.

Her new employer is a drop-dead gorgeous hunk, but he's also dominating and demanding. He's accustomed to being obeyed, but he soon discovers that his feisty new assistant refuses to comply. Connor is shocked that this little imp isn't cowed by his wealth, power, or position. The Dom in him is determined to have her...and her obedience and submission as well. Sylvie mistakes sex for love. But Connor can't love her. He's keeping secrets: dark and dangerous secrets. Everyone who loves him dies. The police believe he's a cold-blooded serial killer.

Without a word of explanation, Connor sends Sylvie away, banishing her to a luxurious penthouse fortress on Park Ave. where she's trailed and spied on by security guards 24/7. He says it's to keep her safe. But she feels like a prisoner...abandoned and betrayed.

When she stumbles upon a locked room, she comes face to face with his past. She'd always suspected Connor had a cruel almost sinister side. But she hadn't thought him dangerous. Could he be capable of murder? And if he wasn't…who was?