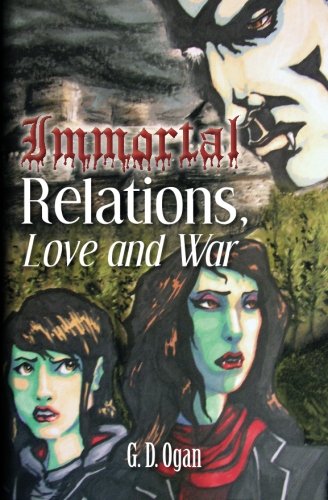 about this book: Continuing on with the series, "Immortal Relations, Love and War" is an adult paranormal romance with non-stop action from first of the book through the final pages. There is a short summary of the start of book one so readers are up to speed. An old friend is dying - the vampires make him an offer he won't refuse. There is a terrorist act against the Russian Federation leadership, followed by an invasion of Siberia by Communist Chinese forces.

The guardian vampires assist in stopping the war before it goes nuclear. A dirty bomb takes out Russian oil production for awhile but the guardians come to the rescue and then deal with the ecological disasters of Chernobyl and Fukushima, Japan. Explicit togetherness is not left out but the level of heat is less than then the first book, still there are multiple births of full vampires taking place. This book will make any man rethink any opposition he might have to "romance novels" as those who have read it were most favorably impressed with the non-stop action.