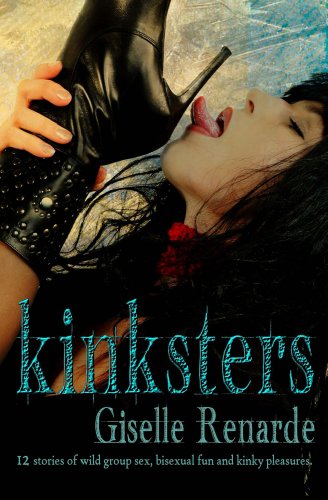 But wait... not so fast. Nothing in the life of a writer can ever be that easy. A mere month after "Kinksters" was released, the publisher announced she'd be closing down operations due to health issues. She's a truly lovely person who genuinely cares about her authors, but she couldn't carry on in publishing anymore. So my popular anthology ceased to be.

It wasn't the first time this had happened in my career, and it probably won't be the last. Publishers come and publishers go, but the work remains, and I'm happy to say "Kinksters" is back on the market!

Kinky couples are great, but nothing beats a big group of kinksters!

In this anthology by kinky queer Canadian Giselle Renarde, a Domme and sub share their fetish with an old friend while a sword collector pays five young men to fulfill her sex swing fantasy. Geeky grad students chase tornadoes and tail while an unapologetic cougar gets licked by three college girls.

A gorgeous restaurant manager plots to take down her boss, only to discover he's two steps ahead. There's an all-girl waxing session, a vintage clothing enthusiast who's shocked to discover her lover's "other woman" is actually a man, and a bureaucrat whose male escorts happen to be angels.

Six socialites switch partners for a Rainbow Night to remember, but not before an athletic team takes bondage to the next level. To top it all, a room full of lesbians lose it over a tattooed femme in Lesbukake.

Twelve sexy stories are ready and waiting. On your mark… get set… KINK!