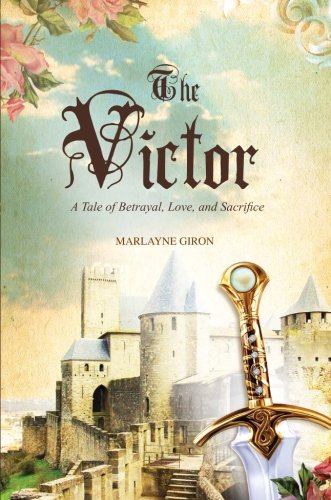 Book: The Victor by Marlayne Giron

about this book: Similar to other epic tales, the story begins its prologue with a classic battle. In the course of the battle, we meet the characters and have a sense of the good guys vs. the bad guys. Thus the reader enters into the story with a foreboding sense knowing Lucius, the dark knight, will somehow undo all that is good in the empire of Ellioth. And classic it is: Eloth the King, Ardon and Joshua the king's foster son and birth-son. Ephlal the magic sword passed down through generations of kings and always tempting Lucius whose goal is its possession. As in stories of old, chivalry and honor prevail as the good guys seek to preserve life and give bad guys every opportunity possible to convert to the good.

With commanding language, the author gives a meaningful description so we can feel the experience, the suspense, the danger, without unnecessary gore or violence. But there are light moments too…in an attempt to create punishment for Lucius, Penloth creates humorous situations (such as securing him so as to face the butt of the horse ahead of him!). Throughout the story, I feel as if I'm watching a favorite old movie, perhaps with Errol Flynn or Charlton Heston as lead actors.

And as with the best of classics, woven throughout are strong moral lessons. We see how easily corruption can conquer the minds of the good and pure: "It's not what I shall do to him, but rather what I will compel others to do" says Lucius the evil antagonist. And the ease with which he disrupts the society of Ellioth is not only well written, but also very very true of real life. Thus the reader should be able to relate this to their own life while also enjoying it simply for its fictional quality.

• How I was inspired to write The Victor
Almost 30 years ago I was hit with a sudden inspiration while listening to a specific verse in Amy Grant's then latest album "Father's Eyes" in the song entitled "Fairytale": "...two princes wage the battle for eternity but the victor has been known from the start". A mental picture appeared in my head of Jesus in a suit of "shining armor" and Satan/Lucifer in a suit of "black armor" crossing swords over "the bride of Christ". I instantly knew what I wanted the story to convey; the ultimate love story of all time between Christ and his bride, "the church" and I knew how I wanted it to end; I just wasn't exactly sure how it would begin or what I would put in between! I have always loved books and movies dealing King Arthur, Robin Hood, etc., and fairytale stories with Lords, Ladies, knights, and mystical swords. It just seemed a natural to rewrite the story of Christ's redemptive work as a grown-up "fairytale" that Christians and non Christians alike could enjoy. I got to meet Amy Grant for the first time in 2010 with a copy of the book she inspired in hand.

• Primary readers
Sixth grade to 95 years old; male and female. It has something in it for everyone and is G-rated.

• How long it took to write
The first draft took me a year to finish then I rewrote it every year after that for the next 20 years.

• How I came up with the Title
The Title was inspired by Amy Grant's song "Fairytale" and also the Christian song "The Victor". Originally titled "The Victor and His Bride"but I knew no self-respecting male would read a book with a title like that so I shortened it.

• How I chose the cover
I had very specific ideas on what I wanted to cover to look like and conveyed them to the graphic artist. She came back with 3 different ideas and I chose elements out of each of them to be combined together into the finished product.

• What was the hardest part of writing your book?
Keeping my timeline consistent and logical and in the early days, having to edit it all on a TYPEWRITER!

• Research
I grew up on the old swashbuckling, medieval movies and also am a big fan of Lord of the Rings, Chronicles of Narnia and other books in that genre so it was a natural segue-way for me. I also read books on life in medieval England.

• What I learned from writing my book.
I learned how to hone my craft.

• What I want to say to my readers.
That there is a God who loves you and that The Victor is a fictionalized tale of that love.

• How I came to be a writer
My friend and I used to take turns sleeping over each other's homes and one of those times she produced a typewritten story in which she had put us in as characters. We read it aloud to each other and it was so much fun that I created the second story for the next get together. From then on we took turns typing these stories which were based on a very popular television show at the time: The Six Million Dollar Man. We wrote hundreds of similar short stories each and even a "feature" length story to boot when I was 13 (which I still have). Lisa has always wanted to be a teacher (and is currently a H.S. math teacher) so pretty soon I found her red-marking my stories for spelling, punctuation, and grammar errors. This would make me furious and I became determined to write a story she couldn't find fault with. This decision, in addition to the spirit of competition to see who could write a better story really honed my English skills. As a result of writing so much, I intuitively picked up on a lot of creative writing techniques. Unlike Lisa, who has a Masters in Mathematics, I never went to college or studied journalism. I have never submitted short stories or articles to writing contests etc., but I have always able to get consistent employment as an administrative assistant because of my typing and writing skills. I have even reviewed and edited scientific reports of Ph.D's with Greek equations in them and typed a doctoral thesis for a former boss.

• About The Victor
The Victor is a blatant allegory of the Bible/Gospels in a medieval setting. I began writing it in my early 20's while bored as a receptionist at work on an IBM Selectric typewriter and also on a Smith Corona typewriter my grandmother, Margaret had given me as a birthday gift. I found Jesus as a result of watching Jesus of Nazareth on television in 1977 because I got so emotionally involved in the story that my Jewish/anti-Christian bias wall was down. I wrote The Victor as a means to convey the Gospel in an emotionally involving/entertaining medium and footnoted it with over 65 scripture references so people who don't know the Lord and would not be motivated to read the Bible might become curious enough to find the real Gospel in the Bible as a result of enjoying my book.

The Victor has been Lexile Rated by Meta Metrics at 1060 AR points rated: 15.

Video 1: The Victor by Marlayne Giron
Video 2: The Victor - A benevolent king; his sword of power; a ruthless traitor bent on revenge and the faithful son who stands in his way with the woman destined to share this throne