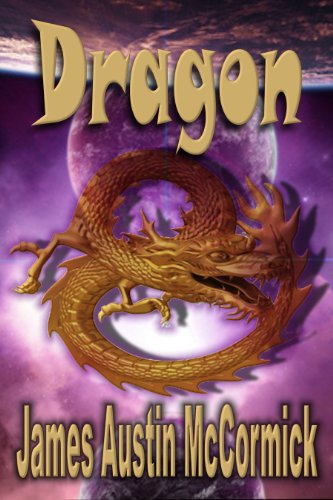 about this book: Dragon is an epic science fiction tale that spans a two decade period and focuses on the fortunes of two ill matched partners who decide to team up to further their own ends. Their adventures take them from being wanted smugglers to government agents who hold the key to stopping an apocalyptic war.

The novel grew out of these two ill matched protagonists who'd been in my mind for a long time. One was a restless, reckless and neurotic elf and the other a taciturn, ill- tempered barbarian, think Conan without the brains or charm. Originally I planned to write a series of interlinking fantasy novellas following their adventures together. The tone was to be comedic and I intended them to be a sort of comedy double act, the elf the clownish figure and the barbarian the straight man, the foil as it were. Well, the characters developed a life of their own and survived, as did the interlinking format to follow their adventures but somehow the story seemed to work better with a science fiction spin. Because of this transition from fantasy to science fiction the novel took about eight years to fully evolve into its present manifestation. It does retain a strong fantasy element though and the two protagonists still travel around by Dragon, although a metallic one instead of the reptilian creature that existed in the original conception. The final chapter "Relics" blurs the lines completely between the world of magic and gods and science as an ancient mystery is finally answered.

I feel that anyone who enjoys space opera and action based science fiction will enjoy this novel. Dragon however also has a little more depth to it as it deals with the themes of war, freedom, tyranny and possible self- destruction. These have always interested me greatly; how sentient and supposedly evolved life forms can brutalise and threaten one another with mutual destruction. Another theme in the novel is how institutions intended to be benign can often become corrupted and tyrannical themselves.

If you like non- stop action and space operas then you will enjoy Dragon.