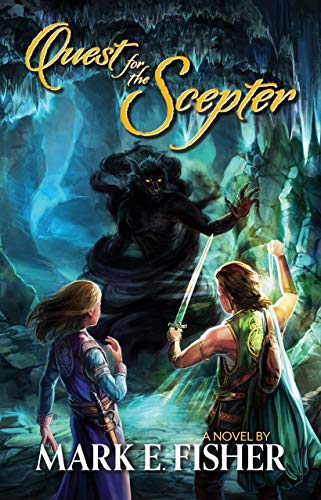 about this book: Quest For The Scepter is the first of an epic, high fantasy trilogy, The Scepter and Tower Series. Mark's favorite fantasy series has always been The Lord Of The Rings, and he has tried to bring the same tone, excitement, and flavor to this series as J.R.R. Tolkien brought to his epic tale.

The Quest inhabits a world called Erde, an echo of Earth, and our tale begins in Ériu, a country much like ancient, Celtic Ireland. In eons past, Elyon, the maker of worlds, gave the Scepter to the Ériu with a charge to keep it safe in the Tower of Dochás, where its light would shine with blessing and hope upon all the peoples of Erde, giving wisdom to its rulers. But the Deamhan Lord, a dark spirit Elyon once banished to live inside a stone idol, sent his arch druid, Faolukan, to steal it, sending Erde into a Dark Age. But after his imprisonment in a desert tower for millennia, the Deamhan Lord and his arch druid escaped. They now control dread Drochtar in the east. Once again, their armies spread darkness and terror across the world. And only the return of the Scepter to the Tower will stop them.

Our story begins as the prince of Ériu, prophesied to steal back the lost Scepter and save the world, has been killed. But the prince's squire, Ewan, discovers that a lowly blacksmith's nephew, Tristan, is the prince's exact double. The squire then convinces a reluctant Tristan to take up the quest.

In the role of prince, Tristan leads a group of high nobles to the coast, where Faolukan confronts them in an inn. Warning them to turn back, the arch druid promises to oppose them with all the magic, monsters, and spells at his command. But Tristan and the Company are pledged to Elyon.

Much to Tristan's dismay, his lifelong friend, Caitir, decides to stow away on their departing ship. Despite the qualms of the nobles on board, this intrepid lass is intent on joining the adventure.

As the Company follows ancient clues to seek the lost Scepter, they cross a monster-filled sea and a continent of spirit-haunted swamps and wolf-infested forests.

But how can a blacksmith's nephew and a cooper's daughter ever hope to defeat the greatest sorcerer Erde has ever seen? Will Tristan ever find the Scepter and save the world?