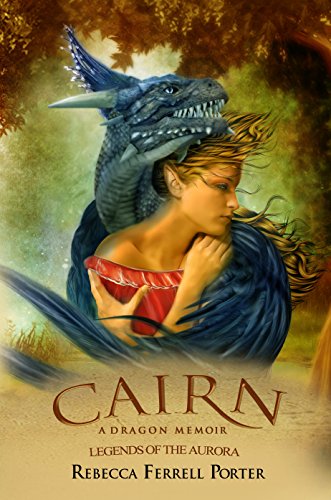 about this book: Troika, the dragon with the twisted tail, never experienced life at the lair because the night he hatched, the dreaded fairies came. He escaped with only fragments of the memories needed to survive in a hostile world, but Mama made certain he had what he needed.

Seven years had passed before the dream came. "Come home, Troika. Your clan needs you," the sweet voice whispers. "And bring the trollkin known as Leaf to me." At first, Troika is angered, but his dragon instincts will not allow him to disobey an Elemental. Soon Troika and Leaf are soaring over the eastern sea, following the northern lights home to the lair, but he never expected to walk into a murder spree.

My dragons are not what readers have come to expect. The clans are wise, devoted to one another, and dare I say it—kind. I rarely take the easy path. It's just too much fun to breathe new life into legendary creatures. Cairn: A Dragon Memoir is the second book in the trilogy, Legends of the Aurora. The mystery began with a timid troll, caught up in a mysterious plot by a vengeful fairy. Cairn moves the characters forward by bringing forth the truth about the dragons and the wondrous light the trolls call the snow lights, but we humans call the aurora.

If you enjoy myths and legends, this is the series for you. My goal is to explain the natural world through the eyes of creatures found only in myths while spinning a magical mystery that can only be unraveled by reading all three books. That doesn't mean you can't jump in at any point. Cairn: A Dragon Memoir and Blue on the Horizon are both complete adventures. Each book features a different main character so each book has a satisfying conclusion, but I have sprinkled clues to the deeper mystery throughout the trilogy so take note of seemingly important bits of information. You never know when the accumulated knowledge will reappear. From the bizarre activities of the humans to the stunning source of the northern lights, it's all presented through the eyes of unforgettable characters. If you have ever wondered what dragons think and feel, find the answer in Cairn: A Dragon Memoir.

I write in the style of what I call Cozy Fantasy. No gruesome scenes or sections of a sexual nature enter my books. I leave those pieces up the reader's imagination, if they so choose. This is a series with powerful messages, and it has been enjoyed by both the young and the no longer young.

Suitable for ages 14+ due to some scenes of murder.