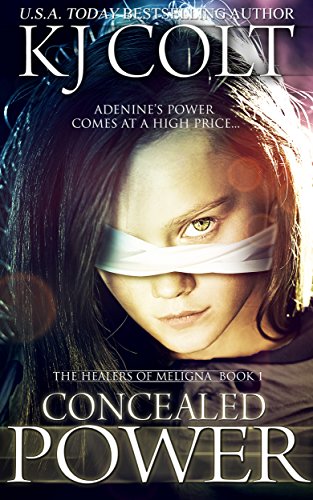 about this book: Concealed Power is a tale of a young girls struggle in a post-war medieval fantasy world. Her parents, forced to do terrible things to protect her, suffer as a result of a magical gift she's been given. Adenine is made blind, her father and uncle died, and her friends suffer in order to protect her from being snatched from her home town and taken to the norther city of Meligna. A city where the healers -- who abandoned their people during the Death Plague twenty-five years ago -- live.

This book took me 16 months to write. I went through three major edits with a professional and very experienced editor.

What inspired me to write this book, and the series, was a core belief that through a controversial topic, I could explore themes of love, power, war, healing, intimacy, romance, friendship and ultimately, how to overcome ones battle with oneself.

I knew I wanted to write it when I was at the doctor's office one day for my annual check-up. I realised I wanted to write something controversial, yet still in the genre of Epic Fantasy. I wanted to build a world full of loveable characters, and interesting societies, that when forced together, create conflict and tension based on differences of beliefs, rather than alluding to cliches of good and evil.

So what is the controversial part of this book? Well, the healers are all women, and healing is done through sexual intercourse. No actual intercourse takes place in this book, but there is a belief, put forward by the Wicked King Cevznik, that all healers belong to men.

I came up with the title because Adenine Conceals her power, her identity, and also conceals her feelings. Through her experiences in this book, and the next three in the series, she develops assertiveness, strength, courage, maturity, love, friendship, mercy, a sense of justice, determination and pride.

This book took months of research, it was my first heavy medieval fiction and I wanted it to be as authentic as possible. The magic themes in this fantasy are small to begin, but by the third book I've introduced a magical creature. By the fourth book we will have another kind of healer, and other magical creatures for you to read about. I do tend to be light on the magic and heavy on character development and relationships between the characters.

This is a unique tale, with some confronting moments, but the entire series will reward to a great degree those who invest in reading it. I promise. I'm currently writing the concluding book.

Video 1: KJ Colt - Author of the Healers of Meligna Series
Video 2: KJ Colt - Talking about the themes in her books