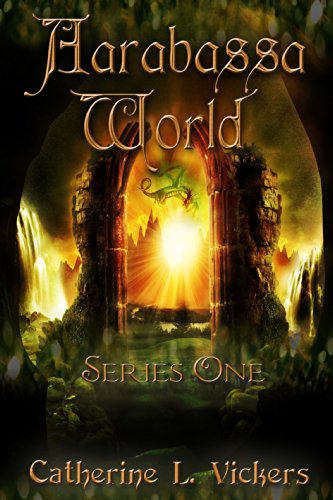 about this book: My epic series is based on the fantasy world of Aarabassa, which is divided by a magic wall. One side is in constant twilight and the other side has continual sunlight.

Dragons, vampires and many other fantasy creatures participate in the adventures. You will meet four young human heroes/heroin. It is a good versus evil plot on who is going to rule the world of Aarabassa.

I am an avid fantasy reader. This is what motivates me. This is what fills my head with adventures. I love fantasy characters, fantasy worlds, the magic of fantasy.

The three books in my fantasy epic, took me around a decade to complete. I still continue to review them, for grammar and punctuation. The tale began on a rainy camping holiday in France. All we could do was read, as we had little in the way of electricity, so no internet. I began to jot down some characters with pen and paper. I had never written anything before. Before I knew where I was, I found myself cutting little paragraphs out and shifting them around. This was my manual cutting and pasting. When I returned home, I transferred it all on to the computer, and there was the beginnings of my first epic fantasy tale.

I do research whenever I come up with a new idea for a creature or an idea that is unique to my world. For instance, my vampires (I call them vamplins because they are not dead creatures), live in ichales. I researched igloos and sort of created my own ice houses. I also did a lot of research on ants for my Myeaz (antoids) creatures. Never look at the history searches of an author, you will find that they look up the strangest of things.

When I make up fantasy words, I tend to look the English word up in Latin, or some beautifully romantic language, and play about with the sounds and spellings. After all, is not the English language made up of many languages put together? Well this is all I do, but of course the words I make up are unique to my fantasy world.

For many years I refused to write anything but fantasy. However, recently I have written some romance, so now I'm penning together fantasy romance, for a short book. I'm also working on Series Two, Book four, of the Aarabassa Series.

As an independent self published author, I would say the hardest part is the Marketing. I love to write and create, so the most enjoyable part is when I have the time to sit down and write. Most of my time is taken up in Marketing. A little sad really, but you need to wear many hats when you embark down the path as an author.