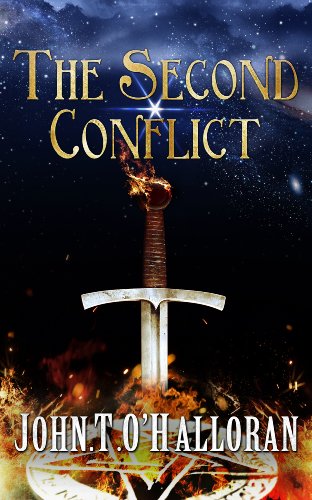 Book: The Second Conflict (The Children of Adam) by John T O'Halloran

about this book: This book is about the emergence of the ancient Magii throughout history, in an effort to right the wrongs of their own world and ours. With the assistance of the four Lords of the Elements, they confront our and their ancient enemy.

You would read this book, because you are troubled by this world and wonder why, at a time in mankind's existence when there should be peace there is so much bloodshed and cruelty. Find the reasons why and how peace could reign and if it is even possible. Thus you will follow the journey In the first book, 'The Second Conflict', as well as in the next book, 'The Final Rite', The Magii move backwards and forwards through time. We see them at the birth and death of Jesus Christ; with The Pope when the Knight Templar's are persecuted; at The Nuremberg Rallies with Hitler and at The Yalta Conference when Stalin is warned by England and the USA to stop his advance across Europe; The Magii are also present when Tony Blair, the English Prime Minister invades Iraq on the pretext that Saddam Hussein has weapons of mass destruction despite the fact that he has a specialist report informing him that no such weapons exist. The Magii also appear when the elements fail to combine as expected, causing drone attacks and other weapons to fail, at a time when Putin along with The Chinese President and other world leaders and dignitaries' disappear without trace, which raises concerns about a global war, insurrection and anarchy.

Who would not lower their head in shame at the thought that The Second World War was meant to be the war to end wars, especially after the slaughter the First World War before that. Look at what has happened since. Also consider what economies have to relly on building weapons of war and ask why they have to intervene in places they have no business. My inspiration was and remains a desire to stop cruelty in all its guises and even investment in the tools of war, where shareholders hide behind balance sheets.

It took me five years to write this book, from which I had to separate the next one, because after proper editing it separated itself.

The Title came easily. After all conflicts, inevitably there is another one, when the word revenge is spread like a plague.

The cover was obvious. The sword used is that which was forged from the ore that came from the mines of the Moon, it is doused in the blood of the fallen angels who will aid whoever dares to raise it in anger, provided their cause is just. The pentagram through which the sword is plunged represents the four elements and spirit, or hope. The flames are those of hell and the starry canopy the heavens of our birth.

The hardest part of this venture has been understanding self publishing and the food chain involved. The writing was meant to be planned, however my pen took me on a different journey and to places I had to visit and research, a lot of it was and remains in my mind .

My readers simply need to forget any preconceptions they have about anything at all, and just be lead on a journey from the beginning to where they are now.