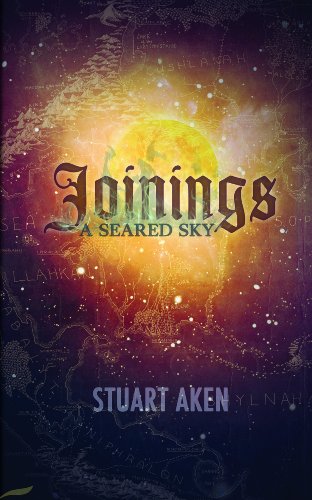 about this book: Joinings, first book of an epic fantasy trilogy called A Seared Sky, tells how an unexpected celestial omen provokes the dictatorial High Priest into capricious action. He rigs a sacred ceremony for selfish purposes, sending an innocent on a hazardous journey. Her betrothed and her father, witnessing the injustice, determine to right the wrong and rescue her from sacrifice. Rite and ritual demand the High Priest lead chosen pilgrims, including the victim of his deception, across unknown seas and lands to an ancient homeland, where a religious artefact must be acquired and returned by the party. The father and lover dog the steps of the pilgrimage, meeting others on the way and taking action that will, ultimately, change the lives of all concerned.

This is an epic tale of adventure, love, sacrifice and death set in an imagined world much like our own in centuries past. It has been long in the writing, starting with a detailed map and much research on topics touched in the telling.

Readers of Tolkein, Game of Thrones, Pullman and Richard Adams will all love this book, as will those who enjoy romance, mystery and thrillers. Elements of all these genres mingle as the three major threads of the story interweave to take the reader on a journey of excitement, emotional turmoil and discovery.

This is a very long book, nearly 700 pages, and you can read it in print or digitally.

• 'The opening scene is gripping. It hooked me in and then I was compelled to read the rest.' — Dr P. Grubb

• 'I've rarely read an epic novel of such power and I write as PhD in creative writing!' — Nigel J. Robinson

• 'The beautiful prose, delectable style of writing and the sharpness of the story is enough to keep one absorbed to the last page.'
— Khamneithang Vaiphei