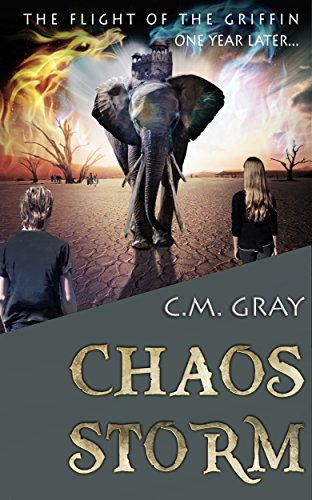 about this book: The tides of Chaos have been tipped back and the balance has once again been restored to the world of man. However, now the Kingdom finds itself caught in a war on two fronts. From the north, the warrior Queen Morgasta is gathering her barbarian hoards and is mounting an invasion force that may sweep the Kingdom into the sea. If Morgasta weren't enough, roomers are reaching the Royal city of Dhenia that another army is approaching across the deserts of the great expanse. Terrible stories are being whispered on the streets, The soul eaters are coming.

Pardigan's clumsy nature brings the crew of the Griffin into wars as they are enlisted on a perilous mission.

A sequel to the bestselling YA fantasy The Flight of the Griffin, Chaos storm is aimed at a slightly more mature teen and adult reader, because there is no more time to play nice!

Bartholomew Bask and Matheus Hawk are attempting a perilous pact with the warrior queen.

Matheus Hawk has honed his skills as a magician and has now tamed a beast of his own that he knows will destroy the Griffin.

The adventure has been taken to a whole new level!

• 'Waiting to find Quint ..must read next book! Good series, good pace and sequence of events. Really could not question the ending ... wow!'

• 'There is non-stop action and the book really captured my attention. I'm looking forward to the third book in the series.'

• 'A thoroughly enjoyable read. I really enjoyed how some of the characters changed in the second book. I am looking forward to book three.'

• 'A must for all adult Harry Potter and Lord of the Rings fans.'

• 'This is a fantastic fantasy story full of magic and evil sorcery. Great descriptive writing which pulls you right into the world of the Griffin crew. Can't put it down C. M. Gray is a writer to watch excellent book.'

• 'I loved this book! When is the next one coming? Or any other books by C.M Gray in the pipeline? Couldn't put it down!Pure fantasy and lots of fun and even better than the first Flight of the Griffin. Once again I should point out that I'm another 'Gray' but not related to the author. Read this book!'