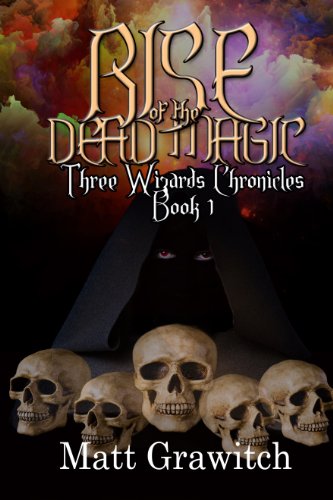 about this book: Originally, Rise of the Dead Magic began as a series of bedtime stories I used to tell my daughters. Often, as they were winding down and getting ready for bed, I would tell them a 20-30 minutes story, made up on the fly. One night, I crafted a story about the Three Wizards and their Teacher and Protector. They seemed to enjoy the story, and the next time I went to tell them a bedtime story they requested another story about the Three Wizards. And that was the last time I told them any other story. After a while, the characters began to take on unique personalities and complexities, and so I decided to create a novel. I then began to read them chapters of the book before bed. This went on for two years, during which time I frantically found extra time to write so I could stay ahead of the game. Before I knew it, there were 7 novels that composed the Three Wizards Chronicles. Book 1 is called Rise of the Dead Magic, on sale now, and Book 2 is called The Box of Death, which comes out this spring (I'm working with the editor on final editing now).

The book is intended for the Middle Grade/Young Adult audience of both sexes, as Nikko (the Teacher and Protector) is male, but the Three Wizards (Summer, Jolie, and Reece) are all female. It is a fantasy book set both in our world (the natural world) and various Realms of Magic. The characters travel back and forth between these different realms. The Wizards of Light Magic are attempting to stop the Wizard of Dead Magic from transforming our world into a surrogate Realm of Dead Magic, a desolate wasteland, where zombies, trolls, goblins, and other creatures roam free.

The first book begins more as a serial, providing a bit of background on the wizards and some of their encounters with Balthazar (the Wizard of Dead Magic), all while setting up the second part of the Book (which becomes one continuous story), which is intended to introduce a new Wizard of Dead Magic, who devises a unique plan to overrun the world.