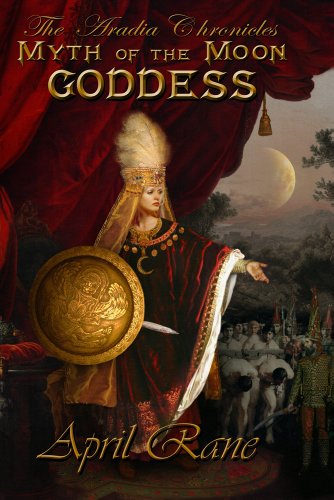 Book: Myth of the Moon Goddess - The Aradia Chronicles, Books One, Two and Three by April Rane

about this book: Myth of the Moon Goddess Books One, Two and Three by April Rane – An Epic Fantasy that will open your heart and soul to past and future possibilities!

It is said that the veil betweens the worlds of immortal and mortal life is thin… But if you asked Aradia once she stepped foot on earth, she would disagree. Sworn to empower women she challenges the brutal and patriarchal society of strife, warfare and violence that she finds on earth.

In her first earthly existence, after her family is butchered, she is taken as a prisoner and at a very young age she is thrust into the role of mother to the young women, like herself, that were to be sold as slaves on the open market. After being taken aboard ship to Greece she meets her twin flame, and her free and passionate nature has full rein. When he leaves on an important mission; our antagonist plays havoc with her life through lies and deceit. Could her human nature overrule everything she has been taught? Is it possible that from the depths of pain and agony that she finds herself in, that will she invoke a curse upon her lover, one that could last generations?

Aradia's quest resumes in her second life as Eurynome, as a budding warrior she draws upon the soul bond she had with her lover from their previous life and she is challenged to not only test her skills of battle against a band of violent renegade's who rape and pillage, but also to dissolve her anger toward men. Do you think she's able to learn to trust?

In her third earthly incarnation as Czarinaea, Aradia is wed to a cruel king, but finds herself tantalized by forbidden passion when on a battle field she meets her Twin Flame. His pure heart and his love for her is tempting, will she find the courage to love.

Through dreams and visions Aradia journeys between the two worlds, learning from her loving spirit guide Desimena all the sacred knowledge that she will need to overcome the curse and then decide whether she is Goddess, mortal… or somewhere in between?

Video: Myth of the Moon Goddess by April Rane