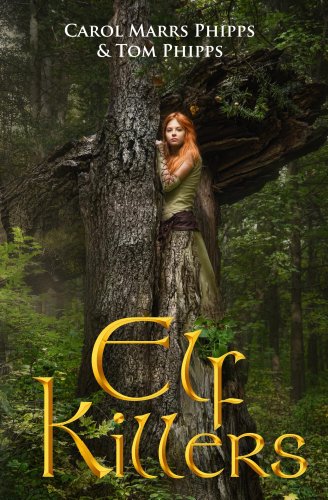 about this book: ELF KILLERS is an Epic Fantasy tale for ages 13 through adult about Elves who had lived peacefully through the ages until the primitive Dyrney suddenly arrive in their idyllic world and begin hunting them for food.

The book is also about the Dyrney, trolls who are utterly immune to magic, hunt at night and steal away elves of all ages for their horrible cook fires. They believe that they are the only 'true people' and see the Elves are mere animals.

After years of unsuccessfully fighting off the Dyrney the Elves decide they must sail away to a new land if they do not wish to become extinct. But at the last possible moment a small group of young adults lead a group of children to gather seedlings to take with them across the sea. When only a single unicorn with his dead rider returns, the entire party of young people is feared lost. A search party is sent out but comes back empty handed and the Elves set sail believing they have all perished.

All the young Elves had been surprised by a hunting party of trolls and scattered into the surrounding woods, except for one who had fallen in the attack. Elf Killers is the story of their struggle to survive on their own in a harsh land that the rest of their clan had fled.

It is the very worst time to be in the woods.

Oisin's plan is to come with his bow to help Aedan and Doona lead a party of children into the forest to gather the maidenhair seedlings his people would take across the sea as they flee the trolls who hunt them as prey. Maybe he can be back in time for supper. And if he only dares to dream, he might also be back in time to speak with Doona alone.

Dyr's plan is an early evening head smash for the foolish Elves who think they can steal away to the sands of the endless eye sting water and build their strange float huts. They will make a glorious feast.

But on the way, Dyr's brutes stumble across Oisin's gathering party and attack, leaving Aedan mortally wounded and scattering Doona and the children to flee in terror into the dark mountain woods, only to be run down and captured by the bloodthirsty trolls.

Can Oisin find the bonfires of the trolls and rescue them before it's too late? And what then? Will any of them live long enough to reach safety?

The Dyrney (trolls) are based on recent archaeological finding on Neanderthals and their language is based on the study of a number of aboriginal languages. Although they are the clear antagonists in Elf Killers, we wanted to show enough of their unique culture and beliefs so that they would not merely be the ugly nameless, faceless monsters that are common in many such tales.

• " Thank you for this unique fantasy adventure story!"

• "I recommend this book to young adults and fantasy lovers alike!!"

• "A sound story of good versus evil, overcoming all odds in adverse conditions and survival of the fittest."

• "I truly enjoy the twists and turns of imagination that these two authors are able to spin. I would highly recommend these authors to anyone who is a fan of fantasy stories."

• "The story runs away with you right from the first page to the last. Noble Hero's facing impossible odd's, a grand adventure quest and foot stomping trolls oh and unicorns too."

• "The characters themselves show courage, but it is the two writers who have set the pace and tried something different, fresh and innovative. Bravo."