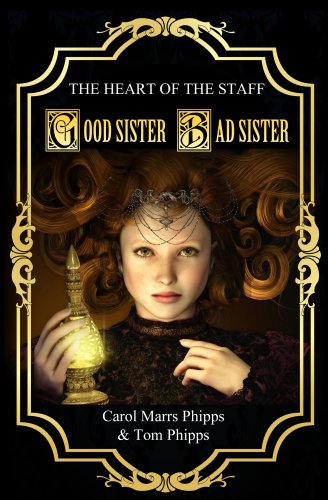 about this book: The renowned wizard, Razzmorten of Niarg has two beautiful daughters. The elder daughter Minuet, is good and the younger daughter Leeuh, is bad. Still, for all intents and purposed life in the Dewin household is usually peaceful until Leeuh's 18th birthday. When a terrible plague comes to Niarg Leeuh confesses to Minuet that she has 'plans' for Prince Hebraun who is already betrothed to Princess Branwen from another country. Things heat up when the Princess suddenly dies from the plague and to Minuet's horror, Leeuh is ecstatic over her demise. Soon Leeuh begins to lay her plans to win the prince, but he has other ideas, and his ideas include Minuet, not Leeuh. It looks like a battle for the heart of the Prince is inevitable between the two sorceresses. Will either of them ultimately win the heart of the prince? And will both sisters survive the battle?

• "GOOD SISTER BAD SISTER by Carol Marrs Phipps & Tom Phipps is a great fantasy that my wife and I read together and really enjoyed; she described it as "Alice and Malice in Wonderland" because the two sisters are such opposites."

• "Liked this concept - I've always enjoyed historical novels set in times of the plague and although this takes place in a fantasy time/place, the threat of the plague is ever present across the narrative. This presents the basic platform and on that healing, magic, good and evil all stake their claim for a little of the stage."

• "At the beginning of the book I wasn't sure if I was going to like it or not. By about a quarter into it though, I was so caught up in the story that I found myself looking at the clock and realizing it was 3:00 am and I need to stop and get some sleep."

• "The story of these two sisters and their completely different personalities is very intriguing.I can't wait to read the further adventures of Minuet and Leeuh!"

GOOD SISTER BAD SISTER by Tom & Carol Marrs Phipps is the beginning story in the epic fantasy series, HEART OF THE STAFF. The story takes you to the Kingdom of Niarg where a cruel and lethal plague has started. The great wizard, Razzmorten is determined to find a cure while his good daughter, Minuet, takes care of the sick. Minuet's half-sister is Ugleeah a selfish, cruel, and vindictive woman who runs off to learn magic at her Uncle Razzorbauch's castle.

The story moves quickly and introduces the reader to many fascinating characters in the form of wizards, witches, fairies, elves, unicorns, dragons, and a wonderful unforgettable magical raven named, Ocker. You will meet ugleeah's mother, Demonica, a powerful sorceress that adds much to the intrigue of the story.

The scenes and settings are described well and the plot enjoys some twists and turns. I enjoyed reading it and have purchased the other books in the series. I am now reading and enjoying THE COLLECTOR WITCH.