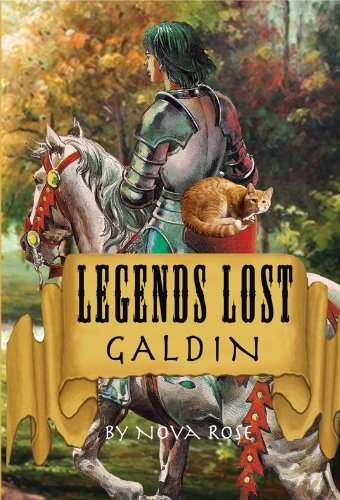 about this book: 1500 years after Tesnayr united the five lands.

500 years after Amborese reclaimed the throne from a dark wizard.

Now barbarians invade the five lands of Tesnayr and it is up to Princess Nylana to find her lost brother: Galdin. Only together can they save the kingdom. But dark magic and an old enemy follow their every move, plaguing them constantly as those closest to them perish.

In this thrilling, fantasy adventure by Nova Rose, teens and adults alike will get lost in world of magic and suspense. Travel across the Ársa Mountains, the Azul Plains, and the open seas during a raging hurricane. Galdin is the third and last book in the Legends Lost Series by Nova Rose. A series that took twelve years to write. Though written in the epic fantasy tradition as started by J.R.R. Tolkien, Legends Lost Galdin is geared towards young adults.

The adventure first began when Rose, a pen name for Janet McNulty, watched her cat playing. Then she had an image in her mind about a talking cat telling her story about how she was once a queen. That image became Amborese. Though that was to be the only story, Rose soon discovered that there was more to the lands of Tesnayr and followed released Tesnayr. But Galdin is the end to this epic adventure and, yes, it has talking cats.

Interesting tidbit: Each book in the Legends Lost Series is a trilogy in and of itself. So put all three books of the series together and you have a ninology.