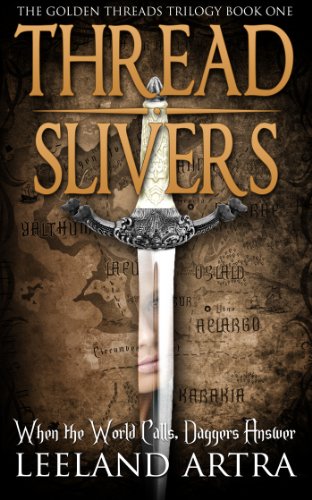 about this book: Thread Slivers is the first book in a trilogy which describes a fantasy epic to save the universe which is wrapped around a coming of age story for two very different people. Ticca a strong willed girl determined to be one of the very best warrior mercenaries in the world. And Lebuin also a strong willed but semi-lost intellectual wizard with far more potential than he ever dreamed of or wished for. As these two are forced together by events that if not handled correctly the entire world will end. Of course they being young are more interested in themselves and don't really see the world ending thing as a real possibility.

The Golden Threads Trilogy started as some thought experiments I had after watching the series Connections by James Burke (http://topdocumentaryfilms.com/james-burke-connections/). I started poking at a number of ideas for possible futures. I ran some of these ideas past my friends via the various role playing games I GMed. I carefully knitted all of the various genres together on a single time line and tried to have a reasonable explanation for how things progressed. I eventually ended with three main campaign realms a science-fiction space ship adventure realm, a fantasy cyber/sword/magic realm, and a fantasy wizards/swords/monsters realm. As my campaigns became more expansive I rearranged the time lines and further developed the pseudo-scientific explanations and physical laws for my four main realms. I spent a lot of time developing a private story for myself to explain how they all were interconnected (a la Connections).

To keep things easy I used the role-playing system now known as the Hero System and had a tight limit on how characters could be built and their limitations. The Hero system had modules and extra rules for a number of genres and my friends and I had campaigns in almost every setting you could imagine. However, when I was GMing the rules for any of the genres were only slightly different with a core set that was constant and everyone seemed to enjoy this. I wrote dozens of stories and adventure scenarios in an ever increasing arc of events.

I had a personal rule that I would not alter a player's changes to the world without good reason and a story on what happened. This rule was very popular as the players knew their actions had a real impact on any future games because my realms' timelines always moved forward. It was this rule that exposed to the players what turned out to be the most popular idea I had, which was that the mediaeval fantasy world was not in the deep past but instead in the far future. When one group of longtime friends finally uncovered what had been my little secret for years the game came to a sudden and complete stop because they couldn't stop talking about how neat of an idea it was.

All of my players since very early had said I should write my ideas into books and publish. I thought this sounded like fun but had too many other things to deal with in life. Fast forward 10 years. It had been 10 years since I have done any GMing with very little actual role-playing. The itch was getting worse, so I pulled out my materials and thought 'why not put this out as a book.' I started working very hard, I read all I could on how to write good stories; I researched the publishing industry; and I spent at least 15 hours a week actually working on turning my ideas into a book. I soon realized I had too much for one book. I divided the original plot up and found it could be three or four books with very reasonable shorter arcs each.

I like thick books so I targeted a trilogy and changed the outline mixing it together so that some things came sooner than before. And that was the final inspiration as to why the heroes are flopping around because things are happening sooner than they should. All I needed to do was explain how and why. In essence Thread Slivers is the start of a fifth series of events and I have all five prior attempts to save the universe at hand so I know the future as it was initially, what was changed, and why it couldn't work that way. In short I am Magus Vestul; and why wouldn't I be? With a different name and many years ago Magus Vestul was my own player character.

Oh and for the record Duke has been in my worlds since the very beginning. He always has been and probably always will be my favorite "shake the story up" character.