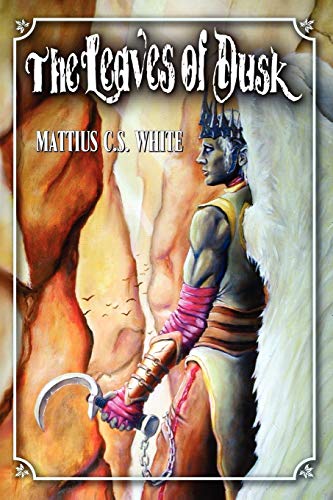 Book: The Leaves of Dusk by Mattius C. S. White

about this book: The Leaves of Dusk continues the story of Tallic Shawen and his quest to utilize the Luzblad against his kin, the SangreLin Empire. At this point, he has endured battles and the deaths of friends and family at the hands of those who share his bloodline. That same bloodline that has cursed him with this existence is the only thing that allows him to wield the Luzblad and fend off its great power from consuming him. The stakes are rising, and now he and the Forghonyi, a group of warriors charged with the protection of the Freelands, must stop the SangreLin from conquering the nations that stand against them, but their tactics are not always as obvious as open war. As Tallic's journey becomes more perilous, he finds more allies along the way, but still more enemies rise up to stop him. The power of the sword is growing, and time draws short before the SangreLin unleash a power so terrible it would mean the end of life upon the Earth.

The series The Immortal Veil will appeal to fans of fantasy like The Lord of the Rings, but I have included some Steam-punk aspects in the form of airships and the world's first locomotive. There are parts also that lean toward dark fantasy, with dealings involving the undead, ghosts, and the afterlife.

The cover for The Leaves of Dusk and the other two books in the series thus far, have come from the mind of my brother Michael B. S. White. We collaborated on an idea for each, and I let him run with it. I have been very pleased with his work, and I know that whatever success that my books have will be directly connected to the beautiful covers he has created.

With The Exiled Son and The Leaves of Dusk complete, I am working toward releasing The Princes of Shadow and Sand. It has been a long and rewarding journey, and I think I have captured my own struggles, the joy, the sadness, and an ending in these books that will resound with readers.