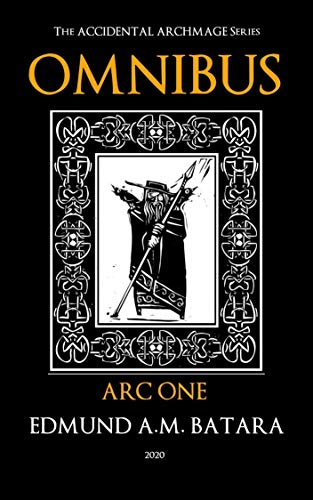 about this book: This first book of the Accidental Archmage anthology collects Books One to Three (Arc One) for continuous, captivating reading experience.

Join one Tyler West, suddenly alone, lost and bewildered, with the three moons in the night sky making it clear that he wasn't on Earth anymore. It is not a game. It's real. And there's no coffee, pizza, fries, or his favorite show on HBO.

The entire series is a narrative of his journey in a fantastic world where myths and legends come alive. Arc One marks his continued disbelief, hidden behind a quick temper and a cynical mind, and a conflict between a modern day value system and a world where such concepts would quickly kill you or worse, consume your very soul.

Our tale begins with the unfinished prophecy of a mad and very dead volva, or Norse seeress, of the Dokkalfr Mountains. Sadly, we are left bereft of the rest of her visions due to the lethal intervention of massive sheets of lightning, which just shows that gods and insults really don't mix.

The god kings sleep, dreams of
Power, magic; Torn veil,
Their watch denied; A ring
Of hiding, a clasp of
Silver, the Norns defied.
A mortal elder, worlds
Tremble; a book written,
A magical world, or
Where grinning vultures reign.
Man but a child, made flesh
With eternal bones; Thou
Deny him? Olympus?
Jupiter? Enlil? Ra?
Cernunnos? Arinna?
Wiraqucha? Mithra?
Powers of wind, fire and
Earth; Of ancient gray Rock,
of lightning; Avail you not.
Fie! All you gods, mind thy
Warning; A path faltered,
A child angered; A rage
Born; of love and despair.
Thy world is dust! Of Fire,
Ice, or Death! Or a world
Of light, if so desired!
Harken! Petty gods! Petty fools.
A wolf wind…