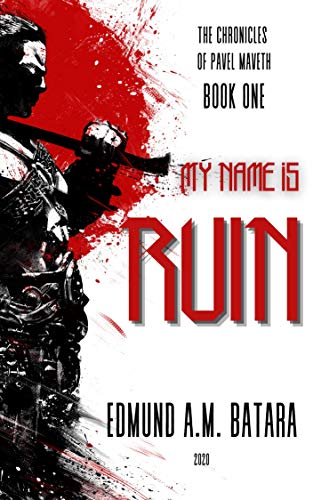 Book: My Name is RUIN - The Chronicles of Pavel Maveth - Book One (Pavel Maveth Series 1) by Edmund A. M. Batara

about this book: Hatu was a dark god. A deity of ruin and devastation. A messenger of Chaos.

Brutally efficient, he carved a path of sheer terror and apocalyptic destruction in the service of his Master. His work endeared him to no one. Deities hated him. Terrified mortals prayed against his arrival. But to avail. He crushed kingdoms, empires, and deities when needed. It was what he was, after all.

Defeated by his enemies, he was thrown into another world, an unfamiliar one, where a god of ruin had no place. There were enough deities for that task. Yet Lady Fate had a quest for him, with strings attached, of course. The Lady wouldn't be herself otherwise. Being recreated as a mortal was one hook and judgement day at the end of ten years was another.

Yet as the scales of the Balance swing wildly around Hatu, he should have remembered that Lady Fate has always been a fickle mistress.