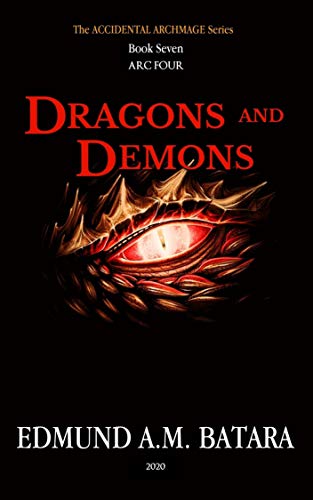 about this book: Book Seven starts Arc Three of The Accidental Archmage series.

Arc Three sees a more mature and settled Archmage with a firm concern about his role and devoted to his adopted world. Yet it is a place now engulfed in war. Loki and his friends want to be the new rulers of Adar.

Chaos now reigns as pantheons find themselves fighting enemies from within and without. Empires and kingdoms have fallen and the rest are tottering on the brink of destruction. And in the far south, a revitalized enemy finds new strength and power.

Far from enjoying domestic bliss, Havard, formerly Tyler West of Earth, now has to rescue his abducted wife amidst Loki's war. Tartarus awaits, where another, broader game for power is being played. The Titans are free and they haven't forgotten the Titanomachy.

Along the way, he has to contend with the past sins of the rock daemon, look for a village of magical misfits, deal with dragons, contend with demons, and more.

Oh, and he needs to pass through Sutr's war with the dwarves to get to where he wants to go.