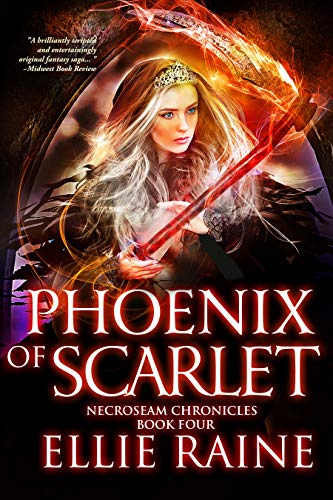 about this book: The exciting adventure continues in this fourth installment of the NecroSeam Chronicles. Fans of epic fantasy authors like Brandon Sanderson and J.R.R. Tolkien will love this unique and complex fantasy saga of magic, brotherhood and mystery that takes readers on a thrilling journey they won't soon forget!

After 2000 years of peace, the Time of Discord is returning to the Five Realms of Nirus. Prophecy claims only the Shadowblood can stop the total destruction of the world. Now, at last he is found! But he is not what the world expected ... for the Gods decided this legendary champion was to be born as twins, Xavier and Alexander, with their magic split between them. It will take the two of them working together to defeat the dark evil that has been brewing for the last 500 years. But will they be ready in time?

Although the bloodthirsty queen of Neverland has been defeated and the true queen of Land reinstated, the war between the realms is far from over. Xavier has married Death Princess Willow, who is pregnant with their first child. But their happiness is shaded with fear of a bleak future unless they can stop the pending destruction of their world. Now they must board an Airship with an entourage of royal Relicbloods heirs from all different realms and sail up to the magnificent floating islands of the Sky realm to avert another war. Little do they know an evil sorcerer has laid a deadly trap for them. Macarius has foreseen that someday soon, the Shadowblood twins will be the only ones capable of spoiling his nefarious plans.

And they both must die before that time arrives... before they find the mystical Relic of Sky, the Phoenix of Scarlet.

In her Author's note at the beginning of Phoenix of Scarlet, Ellie Raine declares: "If you have made it this far in the Reaper's adventures, you are my favorite reader!" Well, that would be me, and I am happy and honored to have been along for this fantastic ride in the imagination of a genius of fantasy and mayhem. George R.R.Martin has his fans for sure, but in my humble opinion, nothing compares to the Necroseam Chronicles. The prologue was the scariest look into the mind of a mad genius I have ever read. It gave me chills because it was so well written that it convinced me there are people out there like that, and they could be anyone, even your brother. Phoenix of Scarlet is a masterpiece of medieval mayhem and feudal machinations. The politics are as potent and convoluted as the gods and creatures playing the game.

I am so impressed by so many elements in Phoenix of Scarlet that it is difficult to know where to begin. But I think I have to acknowledge the magnificent world building first. There is so much knowledge and nuance involved that I could write a thesis on it, and scholars probably will at some point in the future. I won't even attempt to tell you how well this fantasy world is realized but if you want to get an idea of how vast, beautiful, and complicated it is, or how much work Ellie Raine has put into it, look at the maps at the beginning of the book. The characters, major and minor, that inhabit these realms are just as complex and just as fantastic as this awesome world that Ellie Raine has created.

Books in the NecroSeam Chronicles Series: