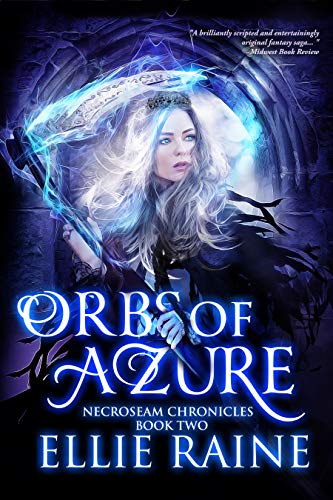 about this book: Reapers at War, Scythes against Swords! A dark force threatens the world of Nirus. Prophecy says only the ShadowBlood can stop it. But, will he be found in time?

Xavier and Alexander, twin necromancers who share one body, have been fully knighted and inducted into the Brotherhood of Reapers. Although Xavier's soul is still trapped inside his brother, the twins have learned to control their split magic between them in a way never seen before in the history of of this world.

Now, following a possible lead to Xavier's missing body, the coexisting brothers travel to Everland's capital, only to discover the false King has betrayed the Reapers. For the first time in centuries, Knights of the Death Realm are forced to fight against living souls in a double-war with both the Necrofera and Everland armies.

Yet, Xavier is no closer to finding his body. He longs to be normal again, especially since he is now reunited with Willow...only it's his brother's body, not his. Even if his soul-less body is alive, how will he put his soul back? The Dream Realm relic, the Orbs of Azure, may be the key.

But first, they must survive this war. And when their comrades are taken captive, the twins follow Death Princess Willow on a dangerous rescue mission to free them from an impenetrable fortress high in the treacherous desert canyons.

Join Willow and the twins as they battle armies of both demons and men, discover unique magical abilities, and meet important allies from different realms, all of whom are searching for the "ShadowBlood", a legendary hero who looks just like the twins... if they had been born as one.

Orbs of Azure is the second book of the NecroSeam Chronicles,a unique and original "Sword and Sorcery" Epic Fantasy that will take readers on an exciting adventure the won't soon forget!

Growing up in a family of fantasy readers and video-gamers, I'd always dreamed of creating the next explosive role-playing video game like Final Fantasy or Zelda. It was going to have awesome reapers and powerful necromancers and cool, badass scythes--I had HUGE plans for this dream game of mine. Then while at the Art Institute of Atlanta, I took a creative writing course. So, I decided to put the game idea that'd been brewing in my head for years into a book format... and wow, I ended up loving it way more than art! Thus began the NecroSeam Chronicles.

The first 3 books have already been published (Willow of Ashes, Orbs of Azure, Pearl of Emerald). The title of the books are actually the name of the magical relics of each realm. Willow of Ashes is from the Death realm, Orbs of Azure is from Dream realm, Pearl of Emerald is for the ocean realm, and so on. In addition, there is a prequel novella called "Princess of Shadow and Dream".

I hope you enjoy reading this series as much as I have writing it!