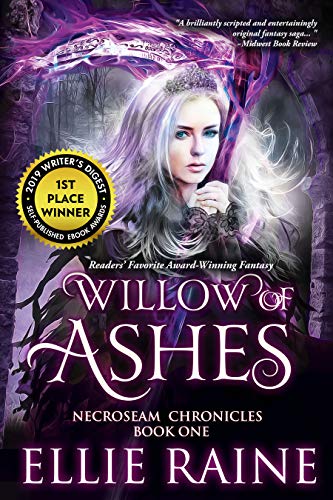 about this book: Journey to a dark enchanting world of heroic Reaper knights, scythe-wielding princesses, evil sorcerers, and demonic beasts. A unique "sword & sorcery" fantasy that braids the lore of the Grim Reaper into a tale of whimsy, wonder, and just a dash of horror.

"One of the most fascinating universes I have ever encountered." ~Readers' Favorite Review

Born with the magic of necromancy, Xavier aspired to one day become a Reaper knight who would serve under the Death King and protect the souls of the dead from monstrous demons that plague the world. But he was denied that honor when he was thrown into the ocean and left to die while rescuing the Princess of Death from a vengeful sorcerer.

Princess Willow, heiress to her father's thrown in the underworld realm of Death, would someday wear the crown and become the Grand Reaper, commanding an army of Reaper knights across the five realms: Land, Sky, Ocean, Dream and Death. But that future was meaningless without the one she loved by her side. Since Xavier's body was never found, she could not accept that he was gone forever, and vowed to find him. Yet even Willow did not suspect the truth.

That Xavier's soul had been ripped from his body, and trapped inside his twin brother.

Now, six years later, the coexisting brothers embark on a journey in search of Xavier's missing body, venturing into a world they had only read about in books. But they never expected to uncover an infestation of undead beasts and bone-crunching dragons, nor did they expect to run across someone from their past... a woman Reaper with fire magic who uses her unmatched skills with the scythe to help the twins fight off hordes of soul-eating monsters.

What started as an exciting adventure of hope turns into a frightening nightmare. For an ancient, sorceress queen has amassed an army, preparing to wage a demon war against the living.

And it's up to the apprentice Reapers, one without a body, to stop her!

Written in an adventurous style reminiscent of classic fantasy authors such as Tolkien, Jules Verne, and Edgar Rice Burroughs, this Epic Fantasy is for readers who are looking for a truly original tale with comprehensive world building, a unique complex magic system, unusual characters, and an unpredictable plot filled with mystery, romance and adventure.

Growing up in a family of avid fantasy readers and video-gamers, the Grim Reaper tale has always fascinated me. My brother had this awesome tattoo of a skeleton wearing dark robes and holding the coolest, curved weapon. He told me it was the Grim Reaper, who came when your time was up and cut out your soul when you died so he could help guide you safely to the afterlife where you'd rest in peace. As any sane child would, I took that as, "So, he's a super hero for dead people!" And thus, my love of reaper-lore was born. Paired with necromancers, my teen years were spent having characters fighting to get out of my head. Originally, the NecroSeam Chronicles was intended to be a video game, but I have found the book adaptation is far more fulfilling and exciting.

Ultimately, this series will be a pentalogy, with the first 3 books already published (Willow of Ashes, Orbs of Azure, Pearl of Emerald). The title of the books are actually the name of the magical relics of each realm. Willow of Ashes is from the Death realm, Orbs of Azure is from Dream realm, Pearl of Emerald is for the ocean realm, and so on. In addition, there is a prequel novella called "Princess of Shadow and Dream".