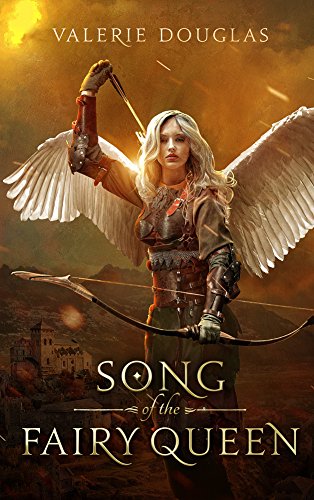 Book: Song of the Fairy Queen by Valerie Douglas

about this book: A statue called Night Descending inspired this image of a beautiful Fairy descending to the parapets and suddenly I had the beginning of this wonderful story about a Fairy Queen coming to the rescue of a beleaguered King whose castle is under magical siege. King Oryan with his son in his arms and only his High Marshal Morgan and Morgan's few people at his back, cornered with only one place to run - up. To find the sky filled with gossamer wings.

As determined as Morgan to get Oryan back on his throne, Kyri also can't deny her nature. What starts as flirtation grows into something much more. You can't help falling in love with Morgan, too. And when those two finally get together... wow, it's not just fiery...

I also wanted to explore the price a crown demands of a ruler who cares for their people, the sacrifices it demands, something both Oryan, Morgan, and Kyri have to face.

There were times as I was telling their stories when I laughed - Kyri hates the song that gave the book its title - and I cried in others. I hope readers do, too.

Other books by Valerie Douglas