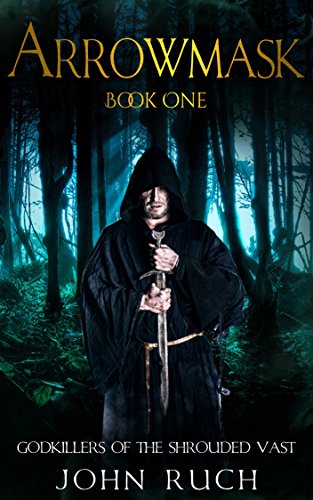 Book: Arrowmask - Godkillers of the Shrouded Vast by John Ruch

about this book: "Arrowmask" is a character-driven, epic fantasy series that will appeal to fans of "The X-Men," "Buffy the Vampire Slayer" and similar tales of eccentric, flawed, rebellious teammates joining forces and fates. "Godkillers of the Shrouded Vast" is where the adventure begins, in an empire where a mysterious force is wiping out memories of magical spells and the locations of distant cities. Pirate and jewel thief Ashton Arrowmask, easily tempted by a bounty, attempts to solve the mystery by retracing the steps of the "Godkillers," an ancient band of warriors that slew an evil deity in the savage northern forests called the Shrouded Vast. The story unfolds through the points of view of several friends and foes: a circus acrobat obsessed with pop-culture fads; a vengeance-driven hunter from the Shrouded Vast; a one-time warlord now making a living as a priestess of torture; and several more.

As one reviewer wrote on Amazon.com: "The author has created a very rich, deep world, and has filled it with interesting and multi-faceted characters... And the hero of the story definitely has his heroic moments, but is also not always on the right side of the law."

"Godkillers of the Shrouded Vast" was followed by the sequel "Against All Flags."

"Godkillers of the Shrouded Vast" has elements of dark fantasy and comedy, and includes adult language and themes.