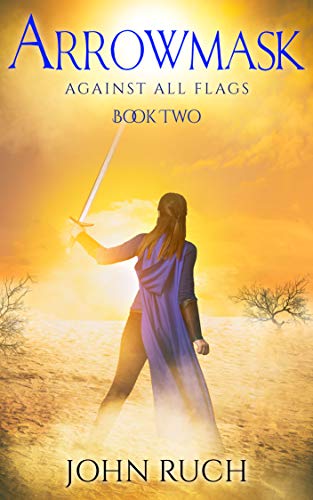 Book: Arrowmask - Against All Flags by John Ruch

about this book: "Arrowmask" is a character-driven, epic fantasy series that will appeal to fans of "The X-Men," "Buffy the Vampire Slayer" and similar tales of eccentric, flawed, rebellious teammates joining forces and fates. "Against All Flags," the second book in the series, finds pirate and jewel thief Ashton Arrowmask attempting to reunite with his scattered friends after their battle with a god, while a supernatural storm destroys entire cities under a rain of powdered gold. The story unfolds through the points of view of several friends and foes: a circus acrobat obsessed with pop-culture fads; a vengeance-driven hunter from the savage northern forests of the Shrouded Vast; an immortal spellcaller struggling with her sanity after her latest regeneration from infant form; and several more.

"Against All Flags" can be enjoyed as a stand-alone adventure without having read the series debut, "Godkillers of the Shrouded Vast," though it will increase the enjoyment of many characters and references.

"Against All Flags" has elements of dark fantasy and comedy, and includes adult language and themes.