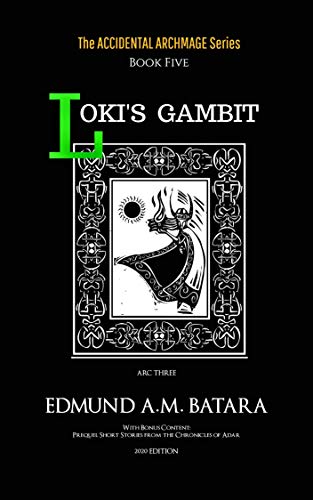 about this book: The fifth installment of the bestselling epic fantasy series.

The Norse Trickster God is on a roll!

The First Mage has promised not to move against him. His scheme is reaching the end stage and only a few pawns remained to be set in place. Meanwhile, the unknowing Tyler is on his way back to the Nordic homeland, crossing the deadly Barren Lands. But even if he discovers Loki's audacious plot to change the world, he will find vast forces arrayed against him, Trickster Gods of other pantheons included. Almost all beings of power who felt oppressed by the high and mighty with be on Loki's side. Complications have reared their untimely heads - his staff is acting strange, the assassins hunting the exile, and the unresolved undead blight affecting the northern lands. Add to that new deities, schemes, characters, hidden civilizations, and mysterious shrines.

Oh, let's not forget that a Divine War is coming.

The disgusting slurping sounds continued from inside the room. Loki shook his head and walked several feet from the receiving area of the cavern, towards the entrance.

Finding he could still hear the repulsive feeding, he went out of the cave into the inner chambers of the temple. He gave a cursory look at the two guards watching the door. Armed with long spears, only the upper torso and the head were clad in red full plate armor, the lower part of the body being in bulbous spider form. The soldiers were perfectly still, and their full faceplate thankfully precluded a look at their facial features.

Good. I would hate to look at spider faces this close. Spiders. Uuggh. I had my fill of them coming here, thought the deity.

As soon as the large stone double-doors closed, Loki found he couldn't hear the revolting sucking noises anymore. The deity looked around the large room and saw the walls were filled with carvings. Looking closer, he found they unexpectedly portrayed stories. Ordinary stories. Mortal ones. The trickster god had assumed the etchings to be of a dark and forbidding theme. He was mistaken, to his irritation. The deity hated being wrong. Loki had not been in this part of the great temple. Meetings with the owner were usually held outside in the forest or on the top of a mountain peak. But he had brought a promised present this time and wanted to discuss matters of significant import.

The stone space also apparently served as a special receiving area of sorts. Stone benches were present, though one, in the middle of the room, had hand and foot manacles. He looked up and saw several magelights, giving the chamber unrivaled illumination.

Nice. Though the décor appeared to lean towards the primitive style. Too bare for my taste, thought Loki as his eyes roved over the entire chamber, examining the place, as was his wont, for weaknesses, traps, and wards. The deity continued around the space, the sound of his boots disturbing the eerie silence of the room.

He was already seated on one of the benches, thinking about his next destination when the massive stone doors were suddenly flung open.

"Ah, Loki. That was exquisite! Such an evil man! Punishing him would be a great pleasure!" exclaimed the newcomer.

The Norse deity stood up and smiled.

"I do keep my promises, Anansi. Evil won't begin to describe that mortal. How long will he last?" he asked.

"Two years, if I am greedy. Five years, if the punishment warrants it."

"Do make it five years. That human deserved it," replied Loki.

"Then five years it will be," said Anansi as he sat beside Loki.