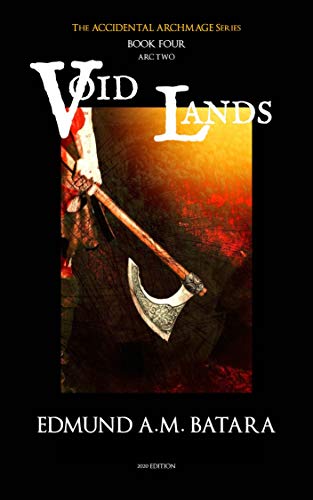 about this book: The fourth installment of the epic fantasy, The Accidental Archmage.

A world on the brink of total war. With their pantheon greatly weakened, the Aztecah Empire has embarked on a campaign of conquest to expand by force of arms - to grab what they could by mortal means, banking on the rule prohibiting divine interference in purely human conflicts. Meanwhile, their furious gods are determined to get their revenge on the deity they blame for their loss of power - the Incan Viracocha. But an ancient being like the Staff God is not without friends and allies.

Tyler West and his companions find themselves trapped among the remnants of a retreating Incan army pursued by an Aztecah horde strengthened by monstrous creatures, their plan to proceed to the Void Lands placed in jeopardy. Not that their intended destination is any better.

The Void Lands. A place where gods fear to tread. Where strange creatures and fantastic hostile beings emerge. A nexus of dimensions, the origins of which are lost in the mists of time. Where Tyler West has to pursue and put an end to the Aztecah Empire's powerful and mysterious patrons - an empire finally on the warpath would be unstoppable if its deities ever recover their power.