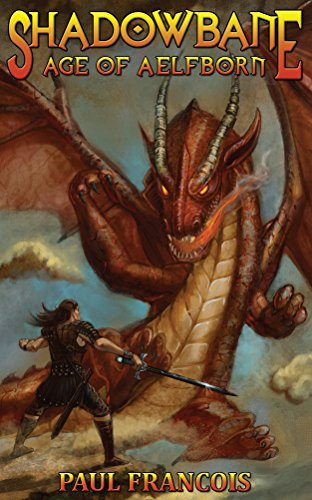 about this book: Shadowbane: Age of Aelfborn is an epic fantasy tale of Megildur, an Aelfborn (half Elf, half Human) on the road to becoming a man. After tragedy befalls his village, he gets his wish. But first, he must die. After meeting the All-Father, Megildur learns his destiny is preordained. However, he must traverse Aerynth, battle legendary creatures, and retrieve the fabled sword before donning the crown and becoming the next High King. In a world torn apart by treachery and conflict, it is every being, or creature, for themselves.

Shadowbane: Age of Aelfborn combines qualities from Lord of the Rings and Greek mythology, with a few twists on some new races. This is the first novel to reveal the lore behind the epic player versus player game, Shadowbane. In this novel you will encounter the following races:

So what is a "Shadowbane" you ask? At first glance, it is a mere sword. For the players who know the lore behind the epic PvP game it's much more. Shadowbane is a mighty but cursed weapon that can fulfill ones destiny and bring despair to another. Originally crafted by Thurin, God of Forge and Craft, its intention was to drive back the Terror of Terrors. An ancient dragon buried deep within Aerynth. Many have fought and died to obtain this sword, including Men and Elves alike. One even betrayed his own king, using Shadowbane to pin him to the Tree of Life.

Aerynth exists within a shroud of betrayal and deceit for over one hundred years. In this realm of chaos, Megildur finds help from an unlikely pair…a sneaky Shade and a nomadic Nephilim. Can this unique trio bring peace and order to Aerynth, or fall prey to the Terror of Terrors?