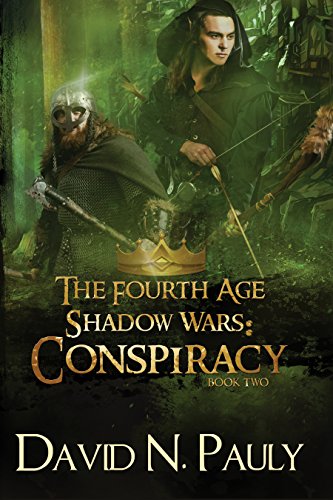 about this book: Conspiracy continues where Assassins ended, when two scouts, one Dwarven, the other Elven are dispatched to their homelands to trace the leads found during Prince Daerahil's trial. Centuries of mistrust between their races cause Bruno the Dwarf and Lithir the Elf, to watch each other carefully as they journey first to the Dwarven mine Nerea, and then onward to the North Forest of the Elves.

A reader will explore and enjoy, the depths of the Dwarven mines, culture, and even religion, as the greatest secrets of Dwarven magic are revealed. The Elf forest is the counterpoint to the mines, a vibrant ancient wilderness full of life in new and varied forms.

Bruno and Lithir soon learn that there are secrets involving the Conspiracy that are worth killing for, and time and again; they must battle foes open and in secret, forced to trust each other.

Conspiracy while intimately tied into the main plot lines set out in Assassins is essentially a stand alone sub-novel, taking the reader into the worlds described above. The hardest part of writing Conspiracy were the chapters about the Elves. Most Fantasy books, concentrate on description, plots, and characters, but rarely do the novels explore the basis of the magic involved. I tried to explain as thoroughly as possible the origins and nature of the magic involved in my world of Nostraterra.

I said the Elvish chapters were the hardest to write, mainly because there was so little written by other Fantasy authors, past or present about the specifics of Elves. Generally, in LOTR or other fantasy worlds, Elves are immortal, ethereal, a touch arrogant, and have been around forever. They hang out in forests, play music and usually represent the "good" in the world. But how and where do they get their food? Where do they actually live in the forest? What is the nature of their magic? What is their relationship with the other races?

These were all questions that took the most creative parts of my mind on its own journey in answering them. It took months to rough out the basic concepts, and I had to reach deep into my personal feelings and memories to write many of the scenes. No, I have never actually been to Lothlorien, but I had to use my unique experiences, no matter how trivial, to render a typically ineffable set of beings, the Elves, into realistic characters to whom I hope the reader can relate.

At the end of Conspiracy, hopefully, Bruno and Lithir will be two characters that readers will wonder about, and hopefully want to read more of their story in the forthcoming novel Dark Shaman.