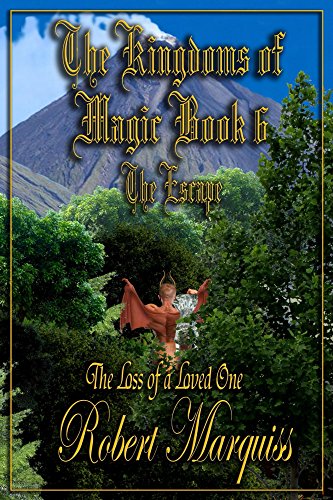 Book: The Kingdoms of Magic Book 6 - The Escape by Robert Marquiss

about this book: Commander Rank of the Underworld has successfully kidnapped Duchess Dielos from the Royal Country House. At the same time Royal troops have arrived to make sure she is safe. Rank sends a decoy party south to lead the troops on a false path, then heads north to the island's volcano in order to get underground fast. Captain Wilkin, in charge of the troops sees through the trick and gives chase. Meanwhile the Pirates' Bosun is sent on a scouting mission to look for Doctor Madison while the Pirate Captain engages the last few ships that attacked the nearby cliffs. On a stone slab he finds blood and Madison's medallion, but no body. In a cave nearby he finds a skeleton with a note for his Captain and hears digging behind the cave wall. He waits for the Captain to return to pick him up. Back at the Fairy Palace Madison and Queen Elise are still in the same bed recovering and making plans for the coming war.