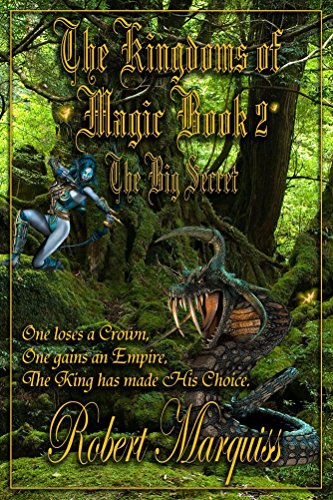 Book: The Kingdoms of Magic Book 2 - The Big Secret by Robert Marquiss

about this book: This book continues the saga of Elise of Nor. Having been made Queen of the Fairies in book 1, she is now taking charge. Her new Gnome friend Winkle brings superior weapons and armor with the help of a Slyth, a six foot tall snake like creature with heavy scales and long tusks, who also becomes a good friend. As Elise and her five personal guards are trying out their new equipment, ten elite underworld raiders stage a surprise attack. With the new swords, shields, etc., the raiding party is wiped out except for their leader who is allowed to escape to report back to King Shadak of the underworld. During the battle Elise kills two attackers herself and is protected by both Winkle and Chardonay, the Slyth. Daleana then seals the ground under the Fairy Forrest to prevent any more such attacks. A good win, but the King of Nor is still dying and no one has been named as his successor!