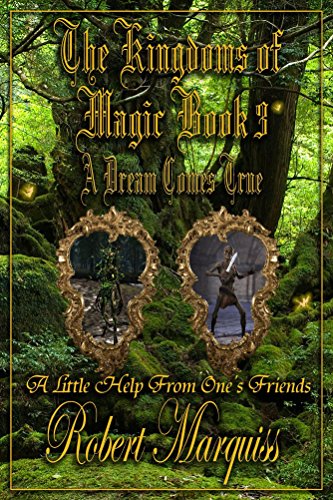 Book: The Kingdoms of Magic Book 3 - A Dream Comes True by Robert Marquiss

about this book: This episode continues the tale of Queen Elise. Having been crowned Queen of all Nor, she is coordinating preparations for the coming war. It doesn't hurt that coronation gifts from the leaders of other communities in Nor have included a toe that brings forth a team of skeletal warriors and a skull that causes your enemies to freeze in place. In the mean time, Daleana sends a message to the dying King Zurich that the new queen is crowned and taking over the reins of the Kingdom with great competence. The King then tells his daughter, Dielos, that she has been demoted from Princess to Duchess and who he chose to replace him. Dielos throws a tantrum and sulks. Only one ruler has not thrown in with Queen Elise: Princess Caprice of the Magical Falls – because the Underworld has threatened her family. Elise goes to inspect with her guards and routs another Underworld raiding party that was about to harm the Princess. And the saga continues.