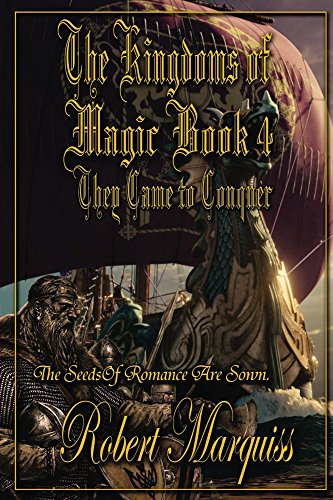 Book: The Kingdoms of Magic Book 4 - They Came To Conquer by Robert Marquiss

about this book: Book 4 continues the story of Queen Elise. King Zurich has now died and the enchantments he had in place to control the Underworld died with him. The Queen receives word that King Shadak of the Underworld has made alliance with the Skavians, Viking like sea going warriors, to attack the island of Nor from both east and west. Those coming from the east are to arrive first, by moonlight. She leads a war party in the new armor to the top of the only scalable cliffs on that side of Nor. Ships from Elise's allies from the Fantasy Isle, the Jade Isle and the Pirate's Lair wait for the intruders at sea. When the action begins, these ships, under the command of Pirate Captain Jamison, decimate the enemy ships, but not before they have landed hundreds of warriors and shot climbing ropes and poisoned spikes up the cliff. At the top, the Queen is hit with one of the spikes, but wins the battle before she collapses. The Pirates' chief surgeon is knocked overboard by another spike. And the saga continues.