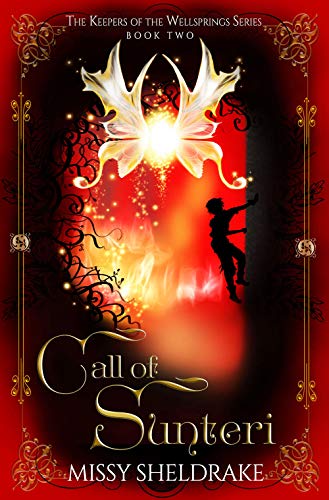 Book: Call of Sunteri (Keepers of the Wellsprings Book 2) by Missy Sheldrake

about this book: A magical novel for teens and adults alike, with full-color illustrations by the author.

Azaeli Hammerfel has been named a knight, and is thrilled to be on her first true quest alongside her parents' guild. Their journey to see Prince Eron and his expecting wife safely to Lake Kordelya is shrouded with a sense of impending doom that tests the strength of His Majesty's Elite and the love that Azi and Rian, the Mage, share. When Kythshire's fairies find themselves a target of the same threat, an unlikely champion presents himself.

Tib Nullen has had a hard life. He's just twelve years old, but as a field slave in the Sorcerer-run country of Sunteri, he has seen more toil, loss, and cruelty than anyone should be made to endure. When tragedy strikes his family, Tib finds himself flung into a plot much bigger than he. In his struggle to make sense of his thoughts, which he fears are not fully his own, he learns he has a greater purpose: to help restore the Wellspring of Sunteri.

Sorcery, Dreamwalking, Necromancy, and mystery fill the plot of Call of Sunteri, the second book of the Keepers of the Wellsprings series by Missy Sheldrake.

Video: Trailer for Call of Kythshire, Book One of the Keepers of the Wellsprings series