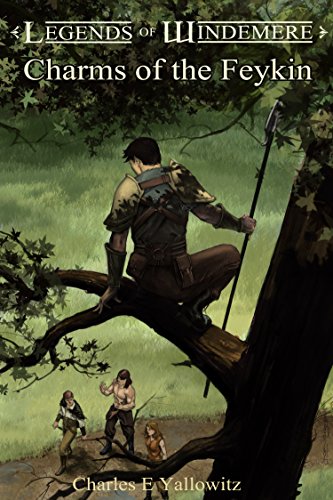 Book: Charms of the Feykin (Legends of Windemere Book 11) by Charles E. Yallowitz

about this book: Delvin Cunningham and Sari have gone missing and their friends are challenging the southern jungles of Windemere to save them. With Nyx leading the charge, the champions will battle their way to wherever their missing allies are being held. What they find instead is a new adventure that can tear the team apart and leave several heroes with shattered souls.

For years, the Feykin have been hunted by the Order of the Kehryhor, who thinks they are abominations born from the pure fairy lines. Now they are ready to take the fight to their enemies with Delvin and Sari as their warlords. Yet, the two champions have different thoughts on how to proceed. Delvin wants to be patient and finish this feud in one blow while Sari is demanding a more aggressive campaign that borders on genocide. The tension is rising to the point where these two heroes may violently turn on each other and any of their friends who dare to step in their way.

Faced with competing leaders instead of loyal allies, the other champions know that something else is going on in Windemere's jungles. A new enemy with stronger telepathy than Dariana and more cunning magic than Nyx is determined to shatter every relationship that the heroes hold dear. It is a race against time and a battle against corrupted friends to stop this mysterious figure, who wants nothing more than death and destruction.

Will any of the champions make it out of the jungles with their sanity and souls intact?