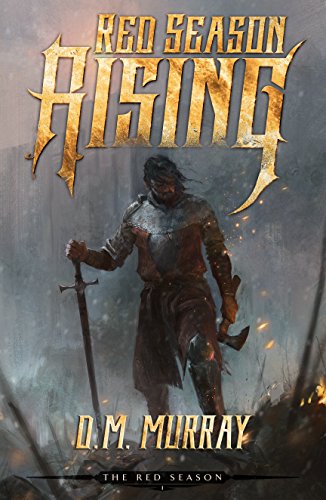 about this book: A feud between Gods.
A nation besieged by armies of man, and demon.
A man seeking redemption, and peace.

Red Season Rising is an epic fantasy with a gritty, dark, and humorous edge. It is the first book in the Red Season Series and is full of mystery, suspense, action and humour. A real strength of the book is the complex relationships between the characters. The human side of the story was a real joy to write. The story will keep you turning the pages, and before you know it, time will have disappeared!

Red Season Rising follows Kalfinar. Formerly a revered military officer, following the death of his wife and infant daughter, he has become a grieving addict. Demoted and disgraced, he tries to rebuild his life in a garrison in the remote Hardalen Mountains, far away from the temptations of the past.

The relative peace he experiences in Hardalen is shattered when a monstrous assassin tries to murder him. Troubled by the appearance of the would-be assassin, Kalfinar and Broden travel to the capital cities of Terna and Carte to consult with the Military High Command. Along the way. Kalfinar is troubled by dark dreams depicting scenes of an unearthly devastation amongst his nation. In Terna and Carte, a deep and unholy conspiracy is uncovered.

Marked for possession, and hunted by demons, Kalfinar must lead a fight to defend a faith he has abandoned, and a state that has disowned him.

Red Season Rising explores themes of loss, addiction, redemption, religious conflict, and loyalty. It took seven years to write (I also have a full-time career in the Energy sector). I was inspired to write this book by a lifetime of interest in mythology and fantasy fiction.