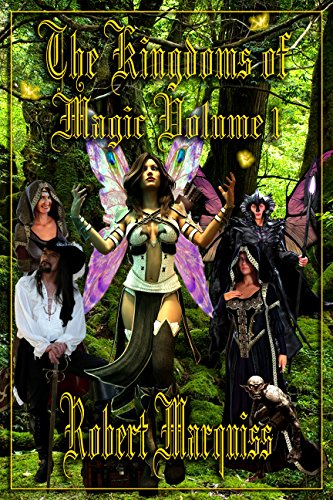 Book: The Kingdoms of Magic Volume 1 by Robert Marquiss

about this book: You're a fairy princess, relaxing by your favorite pond deep in the magical fairy forest. An old sorceress friend comes by. She tells you the King of the whole Kingdom of Nor is dying, the underworld will try to take over and she needs your help to prepare for what's coming. What do you do?

Princess Elise jumps right in, sending messages to all the affected realms requesting aid and alliance. Unexpectedly she finds herself swept along on a course to become Queen and replace the dying King. Though completely unprepared, she takes charge, getting prepared and even beating the underworld's first attempts to take over. She also makes a number of surprising friends and allies along the way, including some that everyone thought would fight her rather than being her allies. In one battle she is severely wounded, but still directs a total victory. Also wounded in that battle is the chief medical officer for the pirates (another surprising ally). He's knocked overboard, beached and flown to the Fairy Palace where he and Elise save each other from certain death. But the doctor is not what he seems.

Video: The Kingdoms Of Magic, the fantasy adventure about Fairy Princess Elise who is destined to rule the Kingdom and save it from the forces of evil.