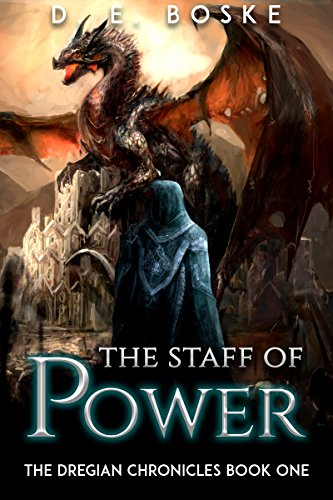 Book: The Staff of Power - The Dregian Chronicles Book One by D. E. Boske

about this book: Hunted, betrayed, and alone. Can the young Mage do what the god of Mages commands? Darian does not trust easily; The Order has seen to that. He has survived where many Mages have failed. And in The Order, failure means death. A Mage's success depends on his sharp wit, not on his sharp tongue. But Darian wields both like a master swordsman.

Time is not on his side and he must fight the Dark Magic that threatens to overwhelm him or be forever lost. When the Mage begins to experience gaps in his memory, he knows that his time is almost up. He will need to find the legendary Morgannate to teach him Dark Magic before his body is consumed by the Weave's Dark wrath.

The Staff of Power is a prize that is worth taking by force and Darian would never let it go any other way.

When an ancient enemy rises against him, will the elf Kyler remain loyal to Darian or will the elf betray him?