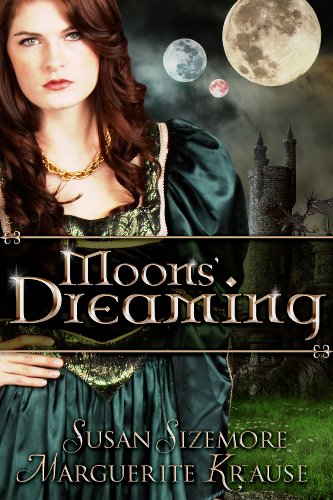 Book: Moons' Dreaming (Children of the Rock) by Marguerite Krause and Susan Sizemore

about this book: Vray of Rhenlan didn't set out to antagonize her brother Damon, chief counselor and heir to their father, King Hion, ruling Shaper of Rhenlan. But their kingdom, like the rest of continent, is only now beginning to recover from the ravages of a plague that was part sickness, part magic, decimating towns and villages in every kingdom. When a territorial dispute drives King Hion to order the execution of the princess from a neighboring kingdom, Vray challenges her father over the injustice of his decision. Damon, not wanting to be inconvenienced by her obsession with the traditional Shaper values of responsibility and fairness, has her banished from the capital and imprisoned by one of his allies.

Worst hit by the plague was the already small population of magic-wielding Dreamers, reduced now to a handful of men and women scattered across the kingdoms. Although many ordinary folk still respect the Dreamers for their work as healers, they have no idea of the vast magical power required for Dreamers to guard against future potentially world-shattering attacks by the outside forces that threaten their world. Some of the Shapers, including Damon, no longer believe in any other-worldly dangers, or in the gods whose power the Dreamers use, and would like to eliminate the Dreamers once and for all.

Moons' Dreaming is the first novel of a two-book epic fantasy saga, "The Children of the Rock," co-written by me and New York Times best-selling author Susan Sizemore. Susan and I set out to write a story about belief and disbelief, duty and selfishness, the nature of parenthood, and the many different aspects of love. We also explored the ways in which the lives of people can become entwined, sometimes intentionally but, more often, in entirely unanticipated ways.